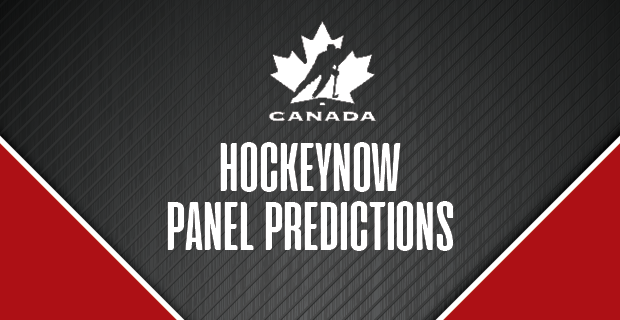 LARRY FEIST
1. Canada
2. USA
3. Russia
This year is as tough as any to pick. Canada’s roster has seven returnees (if Fabbro can go). Ducharme is shaking things up zero draft eligible players and three NCAA players. Canada has a substantially better medal and gold medal winning percentage when the tourney is on North American ice.

The USA team looks very solid as the defending champ on home ice (albeit, Canadian fans will flood down there). Russia has won a medal in seven straight years and it seems they always bring skill and drama. Only twice since 2002 has anyone but Canada, Russia, USA, Sweden or Finland even won a medal. I doubt that changes this year.

Belarus will get relegated. Denmark will be pesky, the Swiss will fare proudly, the Slovaks and Czechs will have some good players but none of those countries will medal.

RYAN MCCRACKEN
1. Canada
2. USA
3. Finland
Carter Hart will be the make-or-break factor for Team Canada when it comes to elimination play. The Everett Silvertips netminder boasts an awe-inspiring .961 save percentage between the pipes this season, and with one of the tournament’s strongest defensive corps in front of him, don’t expect too many barnburners. Plus, Hart is coming back with a chip on his shoulder. Expect him to bring even more focus than he did at the 2017 tournament.

That said, Team USA stands poised to push for back-to-back gold at the tournament with seven returning players of their own and key newcomers like 2017 #22 draft pick Kailer Yamamoto, who started the year with the Edmonton Oilers, and 2016 #19 pick Kieffer Bellows, who is sitting on 40 points in 31 games with the Portland Winterhawks this season.

Team Finland will keep on everyone’s heels with some highly talented players in all areas of the ice.

IAIN COLPITTS
1. Canada
2. USA
3. Sweden
I’ve been reluctant to pick Canada in past years and I’ve been right in doing so, but something feels different this year.

Sure, there’s not as much recognizable star power, but it looks like there could be an all-around collection of talented character players who will bond quickly and get the job done.

You have to marvel at the depth of defencemen returning to this year’s team, Kale Clague, Jake Bean and Dante Fabbro (assuming he recovers in time) – plus Canadiens loaner Victor Mete, giving Canada a very mobile top four.

There’s also returning goalie Carter Hart, who has been lights out in the WHL this season.

Canada will be looking to turn the tables on last year’s champions, the United States, who are be bringing back a number of returning players themselves while looking further ahead with exciting top NHL Draft prospects Brady Tkachuk and Quinn Hughes.

Meanwhile, Sweden looks strong in all areas of the ice, particularly up front with Elias Pettersson and Lias Andersson anchoring the offence.

The United States spoiled the celebration on Canadian ice with a 5-4 shootout win in the final to capture their fourth world title.

This time around, Canada will return the favour in Buffalo, N.Y.

Goaltending should be solid with Carter Hart, one of seven players from Canada’s 2017 junior team that is making a return in 2018.

Canada’s blue line is arguably the best in the tournament, especially with the addition of Victor Mete, who is on the loan from the Montreal Canadiens.

Michael McLeod, Dillon Dube, and Taylor Raddysh are the three returning forwards from the 17 team and will be supported by a list of high-end NHL draft picks.