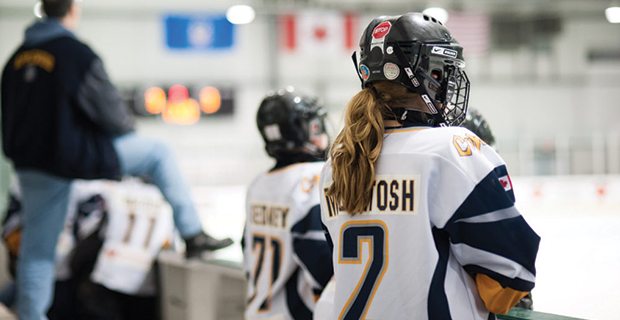 For now, Hockey Canada and the North York Hockey League (NYHL) have reached a compromise when it comes to ushering in the cross-ice/half-ice mandate.

While a new rule has been instituted from coast to coast, requiring all players ages six and under to play on cross-ice surfaces, it’s caused a great deal of stress for hundreds of players across the GTA who play at a higher level than their age group peers in tyke.

A lot of teams in the NYHL (part of the Greater Toronto Hockey League) in particular offer select hockey for six-year-olds or allow truly skilled ones to play up a year with seven-year-olds.

However, because those seven-year-olds aren’t required to play cross-ice and the six-year-olds are, there were concerns that the younger kids would be ineligible and their was the threat of their seasons being cancelled as a result.

To try and save their seasons, the league spent weeks fighting for a one-year deferral and it was granted on Sept. 29.

Throughout the process, there have been many parents, coaches and volunteers who see the value in cross-ice for most six-year-olds, but it’s been argued that it could be a step in the wrong direction for select players.

Minor hockey groups within Toronto argued even though Hockey Canada announced the cross-ice rule would come into effect back in March, there was some miscommunication from Hockey Canada and the Ontario Hockey Federation as to how it would be implemented properly.

The NYHL select groups were given a reprieve for this season, but going forward, they’ll have to fall in line with Hockey Canada’s plans for further implementation beyond this season.

Next year, the mandate will be expanded to include seven-year-olds and then eight-year-olds the year after.

While select hockey at the tyke age group is common in the GTHL, it’s not the case elsewhere in Canada.

Most minor hockey associations elsewhere in Canada had already instituted cross-ice to varying degrees before this season.

As well, it’s been part of the introductory plans for USA Hockey and a number of European governing bodies.

It’s been proven to lead to better chances of possessing or shooting the puck for everyone involved. Also, children have make decisions faster and they’re generally more engaged in the play if they’re playing on dimensions that are relative to their size and development level.