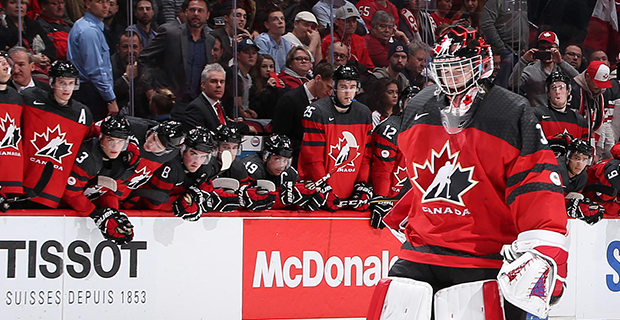 Carter Hart played a big role in goal for Canada last year and could be called upon again to be Canada’s No. 1. (Hockey Canada Images)

Canada’s World Junior roster will be rich with returnees in all three areas of the ice.

Twenty-five other hopefuls will make their case for the red and white during the selection camp in St. Catharines from Dec. 12-15.

Included among them are OHL leading scorer Jordan Kyrou, 2016-17 WHL MVP Sam Steel, WHL leading goal scorer Tyler Steenbergen and Memorial Cup winning goalie Michael DiPietro, all of whom seem to have a great chance to earn roster spots outside of the returning seven.

The five first-round picks from the 2017 NHL Draft (Cale Makar, Cody Glass, Nick Suzuki, Cal Foote and Robert Thomas) will all be watched with great interest as well.

One notable omission from the list is Owen Tippett, the 10th overall pick from the 2017 NHL Draft who played in seven games with the Florida Panthers before he was returned to the Mississauga Steelheads.

He’s considered among the best pure goal scorers in Canada’s major junior circuit, but hasn’t dominated the OHL yet like many hoped he would following a 44-goal season last year.

With Hart coming back and nearly half of last year’s defence returning, this year’s team will be built from the net out.

Hart’s resume is incredibly polished as he has won back-to-back WHL top goaltender awards and is well on his way towards winning a third as he leads the league with a remarkable 1.46 goals-against average and .956 save percentage.

As a 1999-born goalie, DiPietro could very well be next in line to carry the load for Canada next year and Hockey Canada may prefer to bring him along to the upcoming World Juniors as Hart’s apprentice at least.

That’s not to discount other goalies Samuel Harvey and Colton Point, who have looked great this year and were obviously invited to camp for a reason.

The blue line could be loaded with potential power-play quarterbacks, particularly Bean and Clague, who has amassed 41 points in 26 games, good for the WHL lead in scoring among defencemen.

Makar, Fabbro and Timmins fit that mold too while imposing rearguards like Foote and Logan Stanley are a handful for opposing forwards.

Up front, Dube, McLeod and Raddysh all possess strong two-way abilities. While Dube and McLeod can control the tempo of games with their speed and puck possession, Raddysh is a power forward who finished second in the OHL scoring race last season and had a four-goal game at last year’s World Juniors.

There’s also six age-eligible players (Pierre-Luc Dubois, Jakob Chychrun, Nolan Patrick, Victor Mete, Samuel Girard and Tyson Jost) who are in the NHL and could be loaned to Team Canada, but it remains to be seen if any of them will before the deadline on Dec. 19.

The top tier of Canada’s roster looks clear, but there’s stiff competition for the remainder of the lineup, which always makes this time of year interesting.