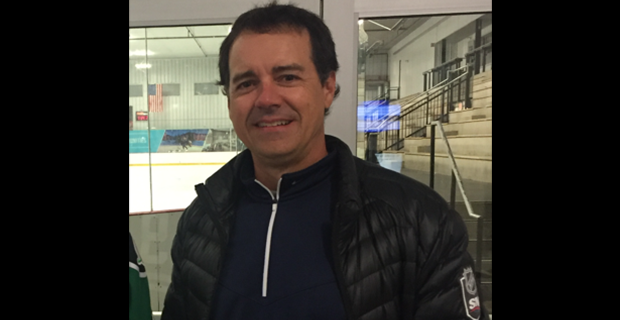 But it’s not Ron Tugnutt, the ex-goalie who appeared in 724 NHL matches and had owned the Central Canada Hockey League (CCHL) franchise the past five seasons.

Tugnutt, who had also served as Kemptville’s head coach the past three years, sold the squad during the off-season to a group, including former NHLer Jason York.

Besides owning a chunk of the squad, the 47-year-old York will also serve as the 73’s director of hockey operations.

During his 15-season pro career York, a former defenceman, appeared in 791 NHL contests with five different teams. He had NHL stints in Detroit, Anaheim, Ottawa, Nashville and Boston.

And will a former NHLer among those calling the shots be appealing to junior hockey players looking to call Kemptville home?

For those that don’t remember York from his playing days – he retired from the NHL in 2007 – perhaps the name rings a bell as he has been working as a radio/TV broadcaster since then. He’s worked on Rogers Sportsnet and Hockey Night in Canada broadcasts, providing colour commentary, primarily on Montreal Canadiens games the past three seasons.

York is no stranger to the CCHL. He played with the Smiths Falls Bears during the 1986-87 season, before spending the rest of his junior days suiting up for three different clubs in the Ontario Hockey League.

York renewed his familiarity with the CCHL this past season as his 16-year-old son Jack played defence for the 73’s. The younger York earned 13 points, including six goals, in 49 games during his rookie season in Kemptville.

Though he’s already secured himself a college scholarship, Jack York will also play for the Kemptville club this coming season before heading off to the University of Maine starting with the 2018-19 campaign.

Besides overseeing the 73’s hockey operations, the elder York said he plans to run various on-ice skills sessions for the Kemptville side during the season.

“I know where the game is going and what needs to be done to get to the next level,” he said.

But he is not planning to step behind the 73’s bench and also serve as a coach.

Another former pro, Rob Dopson, has been hired as Kemptville’s head coach. York and Dopson, who was a goaltender, go way back as they were CCHL teammates in Smiths Falls.

Dopson went on to play two games in the NHL with the Pittsburgh Penguins. Besides suiting up for squads in England, Scotland and Japan, Dopson also toiled for seven minor pro organizations in North American leagues during his career.

Meanwhile, Terry Nichols will be returning for his fifth season as Kemptville’s general manager.