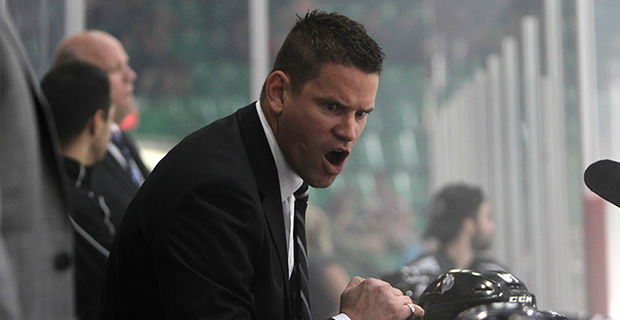 Eric Landry is back in QMJHL, and his hometown of Gatineau, after playing 17 seasons of NHL, AHL and international hockey following his start with the St. Hyacinthe Laser (now the Rouyn-Noranda Huskies). (Courtesy of the Gatineau Olympiques)

One thing is for sure, Eric Landry will never get lost when he drives to and from the Robert Guertin Arena in Gatineau.

He probably knows every short cut to the rink on his daily commute during the season.

Born and raised only minutes from the legendary junior barn, Landry grew up watching Olympiques games as a kid then played against Gatineau for two seasons as a member of the St. Hyacinthe Laser (now the Rouyn-Noranda Huskies).

“The ‘Bob’ will always be a special place for me,” Landry said, as he looked around the rink and took in all the characteristics and championship banners of the 60-year-old junior hockey shrine.

“I have so many memories of this rink as a kid and junior player I would like to create a couple before the franchise moves across town to a brand new facility.”

Technically in is his second season as Gatineau’s head coach after stepping into replace Mario Duhamel after 47 games last season, Landry admits to being more comfortable as the Piques’ main guy.

“After taking over the team more than halfway through last season, I tried to address as much as possible but time ran out on our season after being eliminated by Cape Breton in the first round.

“Despite the disappointment of being knocked out so early, I used the time to evaluate what we needed as a team moving forward this season. I know what kind of team and the type of player we must have to be successful in the QMJHL.”

The former NHL forward has the respect of his players after participating in four NHL seasons with the Calgary Flames (1997-1999) and the Montreal Canadiens  (2000-2002).

Landry also played in the Kontinental Hockey League (KHL) for HC Dynamo Moscow and Atlant Moscow Oblast. In addition, he skated for four seasons in the Swiss National League A for Lausanne HC, EHC Basel, and HC Ambrì-Piotta.

The progression into coaching was the next step for Landry. Opportunity came knocking in 2013 when he was fortunate enough to earn a spot with the Gatineau Olympiques coaching staff under Benoit Groulx.

Groulx is a legend in the QMJHL, winning multiple championships as Gatineau’s head coach. He also led Canada to a gold medal performance at the 2015 IIHF World Juniors and is currently the bench boss of the Syracuse Crunch, the AHL affiliate of the Tampa Bay Lightning.

“Joining the Gatineau as an assistant coach under Benoit was a tremendous learning experience,” Landry shared.

“Ben knows the game so well, he’s an incredible teacher. I had several coaches during my career which I took bits and pieces from, but my time with Ben certainly shaped my coaching style.”

And of course, one of the keys to being a successful head coach is surrounding yourself with quality assistants, which Landry is confident he has done.

Over the summer, Landry enlisted the services of Ron Choules, a veteran Q coach who has been a staple league, starting as a player for the Hull Olympiques in 1980 with close to 10+ years spent behind a QMJHL bench.

Choules is in his second stint with Gatineau after serving as an associate with Benoit Groulx for the 2014-15 campaign.

Landry also added Francis Wathier, another former Olympiques player who kicked around the Dallas Stars organization for a few seasons before deciding to give coaching a try.

Wathier is the young buck of the group at 32, but possesses a wealth of playing experience to share with the current Olympiques roster. He was a part of the organization’s back to back President’s Cup conquests in 2002 and 2003 so he knows what it take to win in the highly competitive QMJHL.

“I thought it was very important to have a nice combination of experience and youth on my staff,” Landry explained.

“Choules and Wathier both played for the organization in different decades but are very familiar with the winning tradition that has been around this team for so long. My job is to continue that tradition.”