Drake Batherson Taking Career Year One Highlight at a Time 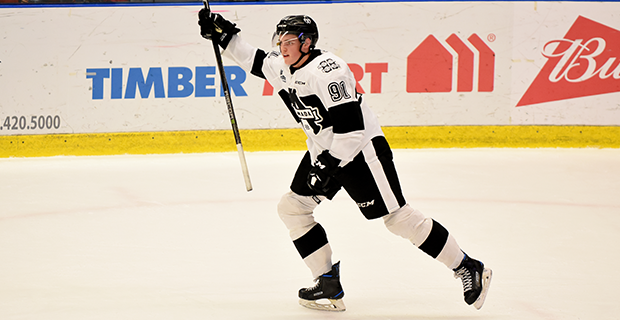 Drake Batherson found out he had been traded from the Cape Breton Screaming Eagles to the Blainville Boisbriand Armada in the quarterfinal round of the 2018 World Juniors en route to Canadian gold. (Antoine Meunier photographe sportif)

Drake Batherson has finally been able to catch his breath.

After landing in Blainville-Boisbriand during the second week of January via a trade with his former team, the Cape Breton Screaming Eagles, the newest member of the Armada was able to take the time to collect and express his thoughts following a frantic time in his budding hockey career.

“After speaking with about 15 teams leading up to the draft, I had a pretty good feeling someone was going to pick me,” Batherson said prior to a recent QMJHL game.

After being selected in the 4th round (121st overall) by the Ottawa Senators, Batherson then began the next chapter in his hockey career.

“I went to their July development camp and learned a lot plus they gave me some stuff to work on before returning once again for the club’s Rookie Tournament.”

In September, he attended the Senators main camp which boosted his confidence and skill level resulting in a tremendous start to his CHL season in Cape Breton, Nova Scotia.

An invite to play in the CIBC Canada-Russia series soon followed as he suited up for Team QMJHL, and he didn’t disappoint.

A native of Fort Wayne, Indiana, the 19-year-old spent a portion of his childhood in Germany before settling in with his family in Nova Scotia’s Annapolis Valley.

Now standing over 6 feet tall and close 200 pounds, Batherson was overlooked in 2014 by the QMJHL in his first year of junior eligibility.

The knock at the time was that he was too small. Being 5’, 5” wasn’t dazzling any teams around the league.

But after a big season in midget AAA with the Valley Wildcats (46 points in 34 games), Batherson caught the eye of the Screaming Eagles.

They loved what he brought on the ice. They also recognized his potential for growth.

The Screaming Eagles chose the native son in the sixth round, 97th overall and he has improved with each passing season.

Three years later the decision makers with Hockey Canada identified his scoring and offensive prowess with a spot on this year’s U20 squad.

“The whole ride of trying out for the team, making it and winning the U20 was an unbelievable experience,” Batherson admitted.

“Winning the gold medal was awesome.”

The high scoring forward found out he had been moved from Cape Breton to Blainville-Boisbriand after Canada’s quarterfinal game against Switzerland but that news took a back seat to his job at hand which was to help his country capture gold.

“Joel Bouchard (Hockey Canada Management Group) and Armada President, GM and bench boss told me to focus on the tournament and worry about being traded after that.”

“The move to the Armada has been excellent, I really like the team. My next goal is to help the Armada go on a long playoff run and win a QMJHL championship sometime in May.”

Maybe then, Batherson will get some well-deserved rest.