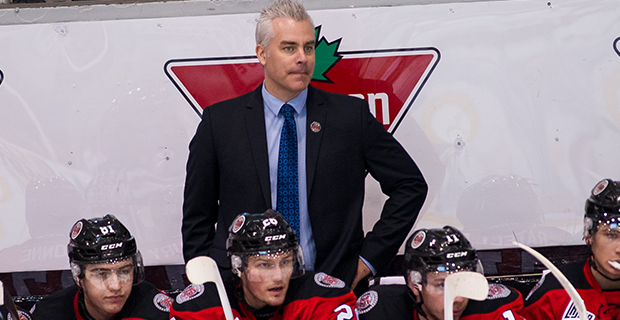 After helping lead Team Canada to gold at the World Juniors, Dominique Ducharme is hoping for another big win, this time with his Drummondville Voltigeurs. (Ghyslain Bergeron)

Dominique Ducharme has admitted that he has replayed the gold medal game at the 2017 U20 world junior championship over and over in his head countless times.

Unfortunately for Team Canada’s bench boss the outcome is the same.

Canada loses to the United States 5-4 in a shootout.

As a result, for close to a year, Ducharme was living his own personal Groundhog Day, caught in a time loop, repeating the same game again and again, reliving moments from that contest and flashing back to the same emotions he felt during that exciting, classic matchup in Montreal.

Fortunately for Ducharme, he can now extinguish the heartbreak of that loss and move forward with more pleasant memories.

Exactly one year after falling one goal short against the Americans, Team Canada regained their spot at the top of world junior supremacy with a 3-1 gold medal performance over Sweden in Buffalo. N.Y.

“It’s normal for coaches to look back and figure out what went wrong during a loss,” Ducharme said, prior to a game in Gatineau, Que.

“It was a great game against the Americans in 2017 we fell a bit short in a few areas that ended up costing us the win. But we as a coaching staff used that experience moving forward at this year’s world junior championship.”

Ducharme along with assistant coach, Tim Hunter who was responsible for the defence were determined to take advantage of their second go around at the world juniors.

The team management was also in great hands with Joel Bouchard, head coach of the Blainville-Boisbriand Armada who brought a calm, confident attitude to the team.

When Bouchard spoke it was coming from his experience as a former NHL defencemen and two time world junior champion with Canada (93, 94).

Ducharme and company drew up a calculated game plan when it came to player selection and the variables/characteristics they needed to bring to the team.

“As a management and coaching staff we determined that we needed to select players that could handle competing against the best from other countries in the world and still play with an edge. There’s such a fine line at the WJC between winning and losing. It takes special players to be successful and I felt that we correctly identified those characters in every one of our guys.”

Ducharme is no stranger to standing behind the Team Canada bench, having been part of the 2015-16 National Junior Team coaching staff as an assistant coach first, before graduating to the head guy in 2016-2017.

He won gold with Canada’s National Men’s Summer Under-18 Team at the 2013 Memorial of Ivan Hlinka tournament.

The Joliette, Que. native is no stranger when it comes to winning after being crowned CHL champion as the head coach of the Halifax Mooseheads, guiding the franchise to it’s first-ever MasterCard Memorial Cup championship in 2013.

Now, one year after rewinding the disappointing 2017 WJC final, Ducharme can rest easy with a job well done with a World Junior Championship to his credit.

When asked what the final two minutes of the final game was like after Tyler Steenbergen scored with 1.40 remaining to give Canada a 2-1 lead, Ducharme paused for a second and appeared to relive those exciting moments.

“On the spot you really don’t think about anything else but which players you want next on the ice,” Ducharme explained.

“I was looking at the clock and before we scored I thought the game was going to go to overtime.”

Canada went on to score an empty net goal to seal the victory and once that final buzzer went Ducharme, his coaching staff and players could finally exhale and begin the celebration.

“It was a big commitment for everybody involved, being away from family during the holidays along with the hard work. Our goal from the beginning was to win the gold medal and we did that. It was a lot of fun to see the smiles on everybody’s faces along with the satisfaction of coming together to win a world championship.”

With one project completed, Ducharme now faces the challenge of winning another President’s Cup emblematic of QMJHL supremacy.

His Drummondville Voltigeurs held the #8 spot among the CHL Top Ten Rankings during Week 21 and are trending in the right direction.

Ducharme has built the Voltigeurs the same way he did with Halifax when they were the cream of the QMJHL crop earlier this decade.

“I think we are in a good position with our young players and confident that we can compete with any team in the QMJHL,” explained the veteran coach.

“I like our group in Drummondville we have the right ingredients. We will have to prove ourselves for the rest of the regular season and playoffs.”

Only time will tell if he gets to celebrate another big win this season.