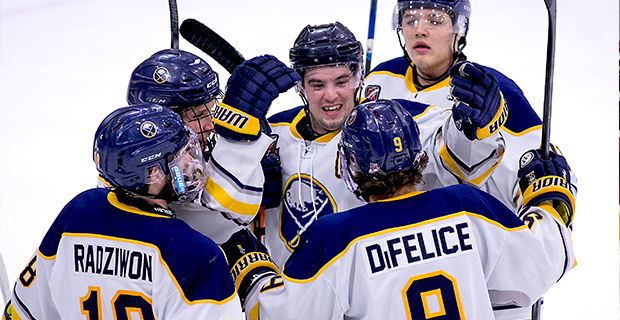 The Buffalo Jr. Sabres will once again be hosting the Governors' Showcase this season. (Deb McGwin/OJHL Images)

Former NHLer Becomes Fury Coach
Rob Pearson is gearing up for his first season of coaching in the junior hockey ranks.

Pearson, who appeared in a total of 302 NHL contests during his playing days, will serve as the head coach for Ontario Junior Hockey League’s Whitby Fury this season.

Pearson, a 46-year-old who retired in 2002, has spent the past decade coaching various minor hockey teams in Durham Region, located east of Toronto.

Last year he was the head coach of the Whitby Wildcats’ Minor Midget AAA squad that captured its Ontario Minor Hockey Association championship.

During his 10-season pro career, Pearson suited up for the Toronto Maple Leafs, Washington Capitals and St. Louis Blues.

He also had stints with six other minor pro franchises in North America before concluding his playing days by toiling one season overseas, with Germany’s Frankfurt Lions.

Pearson inherits a Fury squad that is coming off its best season in franchise history. Whitby registered a 38-11-1-4 regular season mark.

Pearson takes over the Fury coaching duties from another former pro Scott McCrory, who is now the head coach of the Wellington Dukes, one of Whitby’s East Division rivals.

Icehawks To Remain In Milton
One of the OJHL’s oldest franchises will be staying in Milton.

Darren DeBobbelaer, who also owns the Brantford 99ers, a Junior B squad, purchased the Milton Icehawks during the off-season.

DeBobbelaer was hoping to move the Icehawks to Brantford and then have the 99ers relocated to another city.

But for the time being, the Icehawks will remain in Milton while DeBobbelaer also continues to run the 99ers in Brantford.

Milton has had a junior hockey squad since 1966. Besides the Icehawks, over the years the franchise has been called the Merchants, Flyers and Steamers.

The Jr. Sabres, the lone American entry in the 22-squad OJHL, will lay out the welcome mats for the event scheduled from Sept. 19 to 21.

Clubs will play two contests at the showcase, which attracts hordes of junior, university and pro scouts.

All contests will be staged at HarborCenter, the Jr. Sabres’ home facility. The venue has two ice pads.

The results from all of the Governors Showcase matches will count in the OJHL’s regular season standings.

The host Jr. Sabres will square off against Whitby on Sept. 19. Buffalo will then battle the Lindsay Muskies the following night.