Could We See a Pre-Christmas Blockbuster Trade in the OHL? 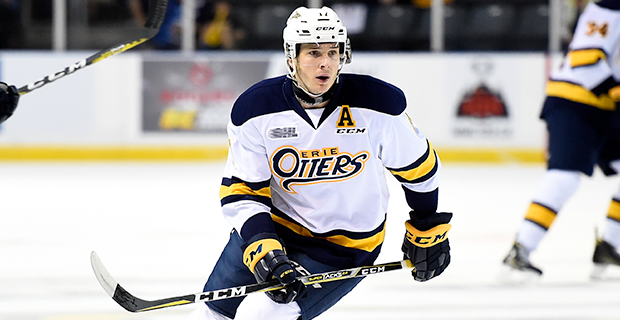 Trading Taylor Raddysh could bring in a bevy of draft picks for the Erie Otters, who are in desperate need of some, but will they eventually pull the trigger on a deal this season? (Aaron Bell/OHL Images)

The new year is always centred around rumours and speculation about who will go where leading up to the OHL trade deadline.

It’s a period fans look forward to for sure, but while the dominoes always fall in the week leading up to the early January trade deadline, there are usually a few big trades that are orchestrated in the fall as general managers find the need to bolster their lineups earlier.

So far this season, Kole Sherwood was traded from the Flint Firebirds to the Kitchener Rangers for four early-round draft picks between 2019 and 2021.

Also, after sitting out the first month of the season following a trade request from the Sault Ste. Marie Greyhounds, goalie Joseph Raaymakers was traded to the London Knights for another keeper, Tyler Johnson, and three early draft picks between 2019 and 2023.

London started off the season terribly at 1-8, but has picked up the pace as of late, thanks in no small part to Raaymakers and his league-leading 2.23 goals-against average.

The Windsor Spitfires had to go all in as hosts (and eventual winners) of the 2017 Memorial Cup, so GM Warren Rychel was working the phone early to land Day and Knott in the fall before eventually adding World Junior champion Jeremy Bracco the day before the deadline.

In a lot of cases, most teams are still in a holding pattern around this time of year as many clubs expected to be strong could still be finding their identities.

As well, there are others who may be doing well right now, but there could still be an element of smoke and mirrors involved as they may eventually fall back down to earth closer to the midway point of the season.

Teams for the most part get into a habit of waiting it out to see if other trades will come about that could dictate the market.

That said, these trade possibilities may seem premature right now, but if we don’t see anything before the middle of December, perhaps they’ll be revisited in January. If they do happen, they’re sure to bring a significant return of draft picks and/or young talent.

Taylor Raddysh or Jordan Sambrook, Erie Otters: It’s not that the Otters are bad this year. Actually, for a team that lost stars like Alex DeBrincat, Dylan Strome and Anthony Cirelli after a run to the OHL championship and Memorial Cup final, theirs sixth place standing in the Western Conference is respectable.

Still, there’s no denying their cupboard of draft picks is depleted as a result of giving away so many in an effort to win the coveted OHL title over the last four years.

According to the OHL Draft Pick Database, they don’t have a second-round draft pick until 2025 and don’t have any third rounders between 2019 and 2023.

It’s a foregone conclusion that Raddysh, who finished second to Alex DeBrincat in the OHL scoring race last year, will turn pro (at least within the Tampa Bay Lightning’s farm system) next year, and the cost for a player of his calibre will probably start with a handful of high-round draft picks, maybe a first-round pick in the past draft as well.

It’s hard to imagine the Otters making a deep playoff run this year after a historic run of four straight 50-win seasons. Under that premise, one would think the Otters wouldn’t want to lose their star without getting anything back in return.

The same could be said for Sambrook, a Detroit Red Wings prospect who could be sold at a premium, as elite defencemen usually are.

Evan Cormier, Saginaw Spirit: Cormier will definitely be moving on next year, if not with the New Jersey Devils in their farm system, then as an overage goaltender with no more years of eligibility.

The Spirit had a bad start to the season, but have done reasonably well through late October and early November. However, they’re in a very tough West Division with the Sarnia Sting, Sault Ste. Marie Greyhounds and Windsor Spitfires all looking like contenders this year.

Saginaw is still on the lower end of the Western Conference, but if they’re somehow able to get to the middle of the pack, perhaps they’ll hang on to Cormier as they’re a rich team in terms of future draft picks.

But if they’re going to barely make the playoffs or miss out like they did last year, they may want to listen to some proposals. Any interested teams would likely have to give up another netminder in return.

Nicholas Caamano or Ryan Moore, Flint Firebirds: In the midst of a nine-game losing streak, the Firebirds certainly aren’t in a position to unload as they need everything they’ve got to break out of their slump.

However, the season doesn’t look promising as they’ve scored the fewest goals in the league and given up the second most against.

If they don’t show significant improvement before the trade deadline, the windows might open for a possible trade for Caamano, a Dallas Stars prospect, or Moore, a 90-point scorer from last season now in his overage year.

Cam Dineen or Riley Bruce, North Bay Battalion: As stated earlier, top defencemen are at a premium in the OHL and the struggling Battalion have two that can help if they’re looking more towards the future.

Twenty games into the season, they were sitting at the bottom of the league standings after finishing third from the bottom last year.

During that time, Dineen has been in the top five among OHL defencemen in scoring while Bruce is more of an intriguing stay-at-home defenceman standing in at 6-foot-7. Bruce is the captain, so it may not be ideal to trade him away and create a void on a young team, but desperate times may come for desperate measures if things don’t turn around before the deadline.