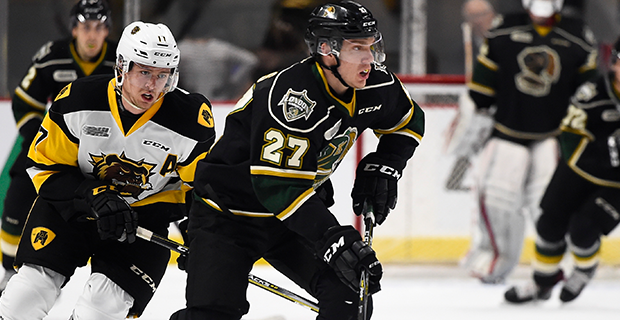 Robert Thomas was one of the most notable players moved ahead of the OHL trade deadline, landing with the Hamilton Bulldogs after starting his career with the London Knights. (Aaron Bell/OHL Images)

While teams spent the first half of the year assessing what kind of club they have and what kind of moves they could make to improve it – whether that’s immediate or for the future – the second part of the year will be dedicated to making a long run through the playoffs for some teams with new star talent in the fold.

In recent years, that’s when teams from the Western Conference have gotten key contributions out of their trade deadline pickups on their way to the championship.

Only one Eastern Conference team (the 2015 Oshawa Generals) have hoisted the J. Ross Robertson Cup in the last decade.

This year however, the Hamilton Bulldogs and Kingston Frontenacs have been two of the most active teams on the trade front and have made significant upgrades in hopes of bringing an OHL title back to the Eastern Conference.

There’s been a who’s-who of top-end veterans shipped off to Hamilton and Kingston.

Hamilton added World Junior gold medalist Robert Thomas in a blockbuster deal with the London Knights as well as 6-foot-6 defenceman Nicholas Mattinen from the Flint Firebirds with a few days left before the Jan. 10 deadline.

That came after they rolled the dice on Flint’s Ryan Moore and Nicholas Caamano and Riley Stillman, previously with the Oshawa Generals, before the new year.

Not to be outdone, Kingston kept up in the arm’s race, nabbing Max Jones and Cliff Pu away from the Knights and Sean Day and Gabriel Vilardi from the Windsor Spitfires.

With a roster that also features offensive threats Will Bitten, Matthew Strome and Brandon Saigeon, the Bulldogs have maintained the top spot in the East for most of the season.

The Frontenacs are fourth, but felt the time was right to go all in since they’ll have one of the league’s best goalies, Jeremy Helvig, for another half season as he closes out his junior career.

Their new additions will round out a talented group that also includes Jason Robertson, Linus Nyman and Eemeli Rasanen.

Both teams were throwing everything onto the table to win the bidding war as far as the East is concerned, but there was plenty of action in the West too, with the league-leading Sault Ste. Marie Greyhounds, Kitchener Rangers and Sarnia Sting improving their championship hopes.

Already a dominant club that had won 23 straight games before making the most anticipated move leading up to the deadline, acquiring Erie Otters star Taylor Raddysh and Detroit Red Wings prospect Jordan Sambrook in exchange for 2017 first-round pick Hayden Fowler and 10 draft picks.

Kitchener, the favourites to win the Midwest Division, stocked up in a major way with U.S. World Junior forward Logan Brown and defenceman Austin McEneny from Windsor, followed by another deal in which they landed highly coveted power forward Givani Smith from the Guelph Storm.

Prior to those moves, the Rangers were already getting great contributions as expected from veterans like Adam Mascherin and Logan Stanley.

To keep up in the wild west, the Sting added a trio of NHL prospects, defenceman Cam Dineen from the North Bay Battalion, forward Jonathan Ang from the Peterborough Petes and forward Michael Pezzetta from the Sudbury Wolves.

Sarnia, led by Canadian World Junior star Jordan Kyrou, was the top team in the CHL in November and while they fell off pace through December, they’ll still be a serious threat come playoff time.

None of the star players added before the trade deadline came cheap. While the Soo paid a premium for Raddysh and Sambrook, other elite players cost buying teams at least a few second or third-round draft picks each.

The Greyhounds, Rangers, Bulldogs and Frontenacs all had to part with their 2017 first round draftees, sacrificing future core pieces so they could contend for a title right away.

On the other end, the Windsor Spitfires and London Knights, the last two Memorial Cup champions, now have great young core pieces to build around.

By trading Vilardi, Day, Brown and McEneny, the Spitfires picked up 2017 first rounders Cody Morgan from Kingston and Grayson Ladd from Kitchener to complement their own first rounder, Nathan Staios.

Let’s not forget the smorgasbord of future draft picks each team has to work with, whether they keep their most immediate ones or eventually use some as currency if they feel they’re contenders within the next few years.

Although they sold off some high-end assets, the Knights and Spitfires are still in a good position, sitting fourth and fifth respectively in the Western Conference.

It remains to be seen if they can maintain those spots, but considering they were among the biggest buyers in the league recently, it’s impressive that they’ve been able to retool instead of rebuild.