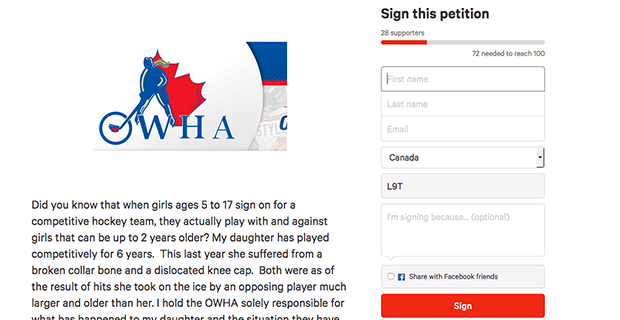 Hockey mom Suzanne Lejeune is petitioning the OWHA to modify the age restrictions around their divisions in the hopes of encouraging greater fairness and less injuries. (Screenshot of petitions at change.org)

A broken collar bone and dislocated knee cap are injuries that are a result of an antiquated way of categorizing teams in female hockey, said one hockey parent.

Suzanne Lejeune has started a petition at change.org calling for the governing body of the league her daughter plays in, the Ontario Women’s Hockey Association, to create a fair and safe playing environment for the thousands of girls in the province who play competitive hockey.

“I used to just accept the way the rules are, thinking it was strange, but that is the way it works. I would hear parents griping about it, but also being complacent,” said Lejeune. “Then we had a bad year with our daughter. It ended with the final tournament of the season where she was already hit so hard in the third period by a bigger player that it winded her. She is a tough cookie and she got up and back to the bench. This was a meaningless game as far as the tournament went, my daughter’s team already lost their other games and they were down 2-0.

“Then in her final shift a player clipped her knee and took her out. She was on the ice for 45 minutes. In November, she broke her collar bone after being cross-checked from behind by a girl bigger and older than her. In March, her teammate, also on the younger age of the gap, also took a hit into the boards and broke her collar bone.”

Calling for Change
While Lejeune agrees injuries do happen in hockey or any sport, she believes these were all preventable. Under the current registration system, girls can play with and against other players that can be up to two years older. Players are placed on either the Under 12 or the Under 14 team, meaning you players who hit their birthday after December are almost two years older than those who just passed the age cutoff.

Lejeune said simply pulling her daughter out of the league is not the answer.

“No, that is giving in. My daughter loves hockey and I don’t think pulling her out sends the right message. She should be able to play and do what she loves and have it be fair. That is the other reason for the petition, it is not fair to her or any other girls that just because you are a bit smaller that you have to stop playing competitively.”

What she wants is to have a fair system, a solution for which she said other parents have voiced their support. They would like the OWHA to use a system that is similar to boys competitive hockey in the Greater Toronto Hockey League and the U.S., where teammates are all born in the same birth year. She said implementing this categorization rule into girls hockey would also eliminate what she refers to as “stacked” teams. Lejeune believes coaches are using the current system, which may have some girls who are starting to or have fully developed physically by the time they are 14, to manipulate their roster. She said many of these older, bigger girls all end up on one squad for each association, creating an unfair advantage to the rest of the teams. Spreading these kids out to major bantam and minor bantam divisions could eliminate this as well, she said.

Considerations Abound
Fran Ryder, president of the OWHA, said she had not heard about the petition until it was brought to her attention by HockeyNow. She said OWHA covers a vast amount of territory in Ontario whether that is girls playing in a more dense city area or a rural/remote area where there are less players.

“We cover the entire province and try to structure the rules so they fit the wide geographic area. We encourage people to make the decisions to play in the best interest in the players and the programs they will play in. We want to encourage girls to play and empower them and their parents to where they want to play,” said Ryder. “A difference of one day can be in an age group and parents have to keep in mind some players will develop physically quicker, emotionally quicker … It’s the choice of the parent and the child if they will play. They know their ability, size, situation and if their child can play in the higher age bracket of their local association.”

Ryder said they haven’t seen any data that is for or against injuries involving age categories. She added there can be so many factors that influence these outcomes, including puberty, and hockey across the board is primarily categorized by age.

“We encourage people to weigh the situation. The whole goal here is to get girls on the ice and empower them.”

Ryder said it appears the last injury Lejeune’s daughter sustained happened in a spring league, over which the OWHA does not have any sanction. However, Lejeune pointed out the age groupings are the same for the spring and regular season. And, it was with the same roster set for her regular season that her daughter was injured.

A Lengthy Process
Lejeune’s daughter plays in the Lower Lakes Female Hockey League, whose policy is that they only respond to concerns and issues raised by each association’s league liaison. According to their website, should any parents, guardians, coaches or managers have concerns regarding any Lower Lakes teams that arise from regular season or playoff games, they are to contact the league liaison who will take appropriate action with regards to contacting the LLFHL. If the majority league agrees to it, only then would it be brought to the OWHA level.

Lejeune feels her concerns that she brought forward at the league level have been waved aside, leaving her no other recourse than the petition.

“As a parent, I feel I have zero contribution. I can’t influence, I can’t do anything to present to OWHA to get them to reconsider.”

Ideally, Lejeune would like to see the league have a major and minor bantam division.

Having gone through the league channels, Lejeune said she only received an email back in June stating the age level decision is a provincial one and, that if the North York Storm supported the idea, “which we do not have enough evidence to make a decision either way,” it would again be a directive by the OWHA. The league said they would be happy to set up a phone call to discuss the issue further with her and that they would speak to the team involved in her daughter’s injury.

The North York Storm explained to her that the amendment she would like to see would take a minimum of two years to implement if passed at the next OWHA annual general meeting and the topic has been discussed many times regionally, however there was not enough support among the OWHA and/or the OWHA associations to implement such a change.

Time for Action
“I have no other recourse. Parents are ready for this change. We can’t go to a game or a tournament where one of the kids is stretchered off the ice, or someone being hurt. This is crazy, we are talking about 10-year-olds here.”

Lejeune said she knows putting this petition out in the summer isn’t ideal, but she plans on being in the rinks and meeting with parents to try and get their voice heard.

“September is when everything starts back up again and I will park my butt in the arenas and parking lots to get the word out to as many supporters as I can. This is a matter that needs attention drawn to it so the league and the OWHA have to look at it,” said Lejeune.

As for those who will simply respond that hockey is a contact sport, Lejeune said the research is out there on concussions.

“Prove me wrong that the injuries have nothing to do with the age category problem, change the categories and let’s see.”

HockeyNow reached out to the Lower Lakes Female Hockey League but as of our press date, they had not responded to our request for comment.

Back to Top
By Kristi Patton| July 13, 2017
Categories:  Female
Keywords:  ON Female