Comtois and Batherson Come Through for Q at WJC 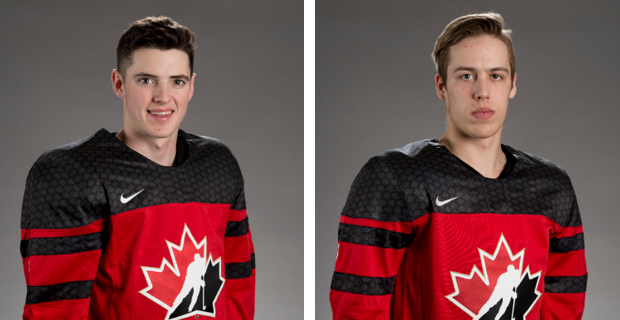 Although Maxime Comtois and Drake Batherson were not invited to Hockey Canada’s Summer Showcase, the two impressed at the Canada-Russia Series and earned a spot on the Team Canada roster. (Matthew Murnaghan/Hockey Canada Images)

There was never going to a huge contingent of QMJHL players on the Canadian roster at this year’s IIHF U20 World Championship in Buffalo, N.Y.

None of the three attended Hockey Canada's Summer Showcase in July and August, but strong play as members of Team QMJHL during the recent CIBC Canada/Russia series surely helped their cause.

That number (3) was two thirds fewer than last December when nine QMJHL players earned a chance to wear the maple leaf.  Seven QMJHL players eventually went on to play for Canada and earn a silver medal.

After two exhibition games against a team of U SPORTS All-Stars, Harvey was released, leaving Comtois and Batherson left to carry the QMJHL torch.

Both forwards moved on to play against Denmark where they survived the final cuts and solidified their spots with Canada.

“I am very excited to represent my country, my province and the league,” said Comtois, after being told he had made the team by the Hockey Canada coaching staff.

Comtois is skating in his third CHL season with Victoriaville and was selected by the Anaheim Ducks in the second round (50th overall) at last year’s NHL Entry Draft.

The Longueuil, Que. native will wear #14 with the world junior team and is expected to play an important role in Canada’s success at this year’s event.

“I’m the type of player than can play different roles. I am prepared to accept whatever the coaches ask me to do. I’ll kill penalties, take face-offs, keep my game simple and concentrate on the little things to be effective.”

Comtois is a heart-and-soul type of player with the Tigres and has the kind of leadership that every winning team requires.

Before his departure to the Canadian Selection Camp, Maxime had 29 points in 29 games along with 40 penalty minutes.

As ‘Q’ rivals, Comtois and Batherson first became teammates during the CIBC Canada-Russia series and will sport the same sweater once again for Team Canada in Buffalo from Dec. 26 to Jan. 5, 2018.

Originally a native of Fort Wayne, IN, Batherson was never on the radar for a shot at this year’s Canadian squad but a torrid start to the regular season in which he accumulated 17 goals and 22 assists (39 pts.) in 24 games made Hockey Canada take notice.

He and his family live in the village of New Minas, Nova Scotia making him the only Atlantic Canadian invited to camp.

The invite and a slot on the roster were almost for not when Batherson broke a finger after being slashed and had to miss a number of games. But the 6’2, 187 lb. scoring sensation overcame the injury just in time to make the national junior team.

Just receiving the phone call to attend was a big thrill for the Ottawa Senators fourth round pick in 2017.

"It's probably the best news I've ever gotten, to be honest," he told CBC News earlier this month.