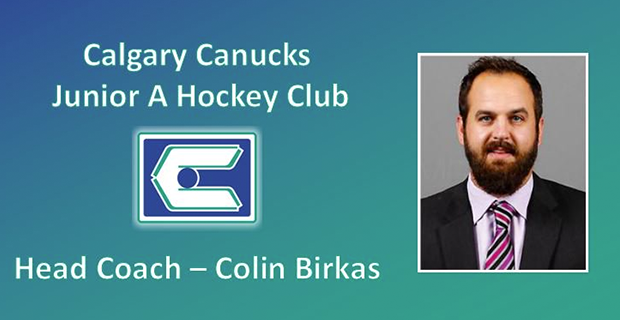 Coming off the franchise’s best year since in more than a decade, the Calgary Canucks look poised to take the next step as a winning franchise.

However, it will be with a new coach, when earlier this summer, head coach James Poole announced his resignation after just one year with the team. It was a surprise to many in the league.

With Poole’s departure, the Canucks went to work searching for a new leader, and they found their man out east. Colin Birkas, who had coached Junior A hockey since 2011 in the Ontario Junior Hockey League (OJHL) and Central Canada Hockey League (CCHL), is the newest head honcho of Calgary.

Birkas has an impressive 201-124-19 record through Junior A. From 2011 to 2015, he coached the Kingston Voyageurs of the OJHL, making the conference finals multiple times, while also building the team as the general manager to send the Voyageurs to one league final. After a year off, Birkas joined the Brockville Braves.

With the Braves, Birkas guided the team to 33-26-1-2 and a sixth place finish. However, the Braves management cited they wanted change in culture and reassigned Birkas as a scout, according a March 2017 story on the recorder.ca.

Having five years of Junior A coaching experience, Birkas came west when the Calgary job opened up.

Of course, jumping across the country for work can be tough.

“It was difficult to move away from Ontario. The support from family and friends to pursue this has made it easier,” Birkas said.

Beyond his impressive winning record, Birkas sent more than 70 players to US and Canadian post-secondary institutions, or Major Junior hockey programs – something noted in the Canucks’ press release.

Birkas said it was likely a huge factor why the Canucks’ brass liked him.

“I think a big reason I got the job was my ability to advance players to the college level,” Birkas said. “It has always been my philosophy that this is how we can pay the players back for all the hard work they put in. Come to the rink, give an honest day's effort and I along with my staff will work the phones to provide the player with options to play in the NCAA, CIS, or WHL.”

The Alberta Junior Hockey League (AJHL), like most Junior A leagues, prides itself on advancement of players, so Birkas’ success and connections with coaches around North America bodes well for future Canucks players.

Regarded as one of Canada’s top Junior A leagues, Birkas noted it is different from the eastern leagues he played in.

“The AJHL has a reputation for being very pro-like style and players that compete every night. The OJHL is loaded with skill and great competition too, I just think with the lower amount of teams and the shear competition for spots I think the AJHL is a very difficult league to play and coach in,” he said.

Birkas does arrive with a fiery past – the coach was suspended for the 2014-15 playoffs, plus the entire 2015-16 season after he allegedly instructed one of his players to slash an opponent. He appealed the suspension and has since moved on.

It was his fourth suspension during his time in the league, after picking up one in 2011-12 and two in 2012-13. His recent season was without any incidents and it looks like the year away from coaching allowed him to process his actions.

CANUCKS OUTLOOK
Last year, the Canucks finished third place in the Viterra South Division with a 37-19-4 record, their first finish at least fourth or better since 2009-10. Poole, who had come from a successful Okotoks Oilers program (Canucks AJHL rival), turned things around for Calgary and left it in a good spot for Birkas.

Although they haven’t won an AJHL championship since 1998-99, a winning season was a huge step and Birkas will look to build on it.

Calgary won’t have top goalie Logan Drackett back, as he is off to RIT for school. In addition, their top three scorers have aged out of the league, so it will be a new core leading the team. However, a renewed reputation and more of a lure to local kids, the Canucks should be able to follow up a successful year.

Having just arrived in Cowtown, Birkas has been busy meeting the staff but said the team has strong incoming players.

“[President and general manager] Pat Loyer has worked very hard so that whoever they hired would have a chance to succeed right away. We have signed some top local talent but also signed some legitimate Americans, too,” Birkas said.

“It’s been clear since I got here they are committed to the on ice product so if we need to add to the roster after camp we will do so,” Birkas added.

Calgary kicks off their season at home on Sept. 17 against Olds, giving Birkas more than a month to prepare his new squad and shape the team through training camp.