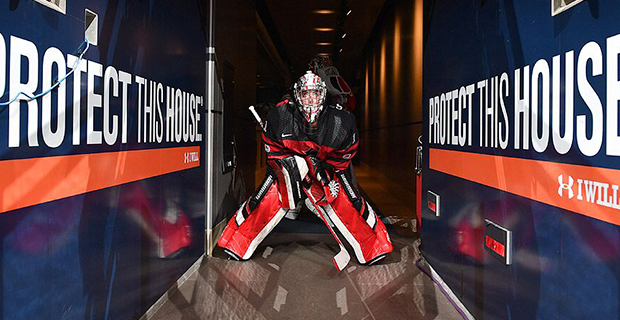 Canadian netminder Shannon Szabados gets set for the final game of a six-game series against the U.S. in her hometown of Edmonton. (Hockey Canada Images)

Canada’s national women’s team got the best of the U.S. in a six-game series but the wins that really matter will not be earned until February at the PyeongChang 2018 Winter Olympics.

“We’ve put some fear into the other team now,” said Lauriane Rougeau (Beaconsfield, Que./Montreal, CWHL) after the Game 4 win.

More importantly it has boosted the confidence of the Canadians who have had a tough go with the U.S. in international tournament play since they won gold at the Sochi 2014 Olympic Games.

“This has been such a necessary bounce back after the 4 Nations Cup. We’ve been so focused on these games and on our Olympic preparation, so tonight we couldn’t be happier with the results.”

While the two rivals were feeling each other out in the first two games of the series, the other four were decided by just one or two goals. That includes the final, played in front of an almost sold out crowd in Edmonton, where Jennifer Wakefield scored the game winner in overtime to give Canada the 2-1 win.

“It was pretty tight. I think every game we play against them we know it is going to be tight. Every battle we have to win,” said Canadian captain Marie-Philip Poulin (Beauceville, Que./Montreal, CWHL). “Obviously they have a great team and we respect that but we wanted to get that win here in Edmonton and having that overtime win at the end of that series feels pretty good. We have to build from that and keep going because the work is not even close to being done yet, so we have to keep improving on our side.”

Standouts Poulin and Meghan Agosta (Ruthven, Ont./Hockey Canada) led Canada in scoring with five points each over the course of the series. Goalie Shannon Szabados proved she continues to be battle ready for the Olympics. She earned two of the wins in the series, allowing just two goals. Not surprising when you consider her record from the past two Olympics — she has allowed just four goals on 117 shots over six games. In this series, she turned aside 55 shots, allowing two goals in her two wins in Game 3 and 6.

After losing the opening game of the series 5-2, Canada tightened up their defence, allowing just four goals in five games. The team also responded well after coming out of the gate with a loss, getting the 5-1 win.

After coming up short against the U.S. at the IIHF Women’s World Championship last April, losing the gold medal game 3-2, Canada had hoped to turn things around in the last tournament play before the Olympics at the 4 Nations Cup in November. Again the U.S. came out on top defeating them 4-2 in the preliminary round and 5-1 in the gold medal final. That makes the wins in this series that much more meaningful for Canada with less than two months to the Games.

“I think we have been working a lot since 4 Nations and it feels good on the confidence but now we have to move forward,” said Poulin.
Head coach Laura Schuler echoed that statement.

“I’m really happy with our process and where we are at. One thing for sure is that our girls have been so open to little tweaks and changes in our gameplay that have helped us continue to get better and I think that has been a difference in helping us be successful, but there is still more work to do for sure.”

One area of improvements seems to be gaps in their special teams. Penalty box troubles in the 4 Nations Cup followed Canada to the Olympic tuneup series against the U.S. In the first game of the series, the U.S. capitalized on their special teams, scoring two of their five goals on the power play and one shorthanded. Canada scored just two goals on 22 chances with the extra attacker in the six-game series.

For the U.S., who will announce their final roster for the Olympics on Jan. 1, it will be solving whatever is ailing their offence since that first game outburst against Canada back in October.

In fact, Canada very effectively shut down the U.S. top line of Brianne Decker with Knight and Kendall Coyne on the wings. A line that had a combined 33 points in five games for the U.S. at the world championship, was shutout for three of the six game series. U.S. head coach Robb Stabber said the team has to be better in the red zones.

“We are a highly skilled team and we need to make sure that we go out and play fast. The goal for us is to be hitting on all cylinders in February,” said Stauber.