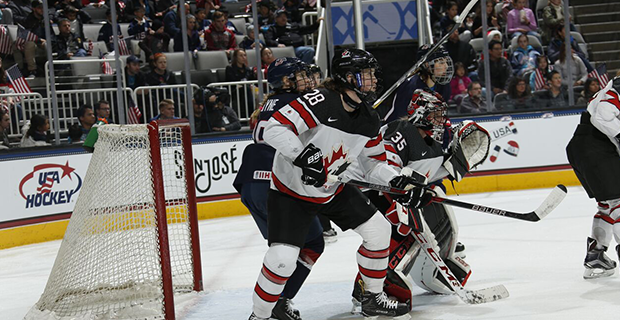 A goal that was reviewed, then reviewed again, turned out to be the winner as Canada’s national women’s team defeated the U.S. 3-1 in San Jose, California on Dec. 15.

Sarah Nurse (Hamilton, Ont./University of Wisconsin, WCHA) scored her first goal against rival U.S. in a crowded crease scramble to give Canada the 2-1 lead in the second period.

The play was quickly called into review, which clearly saw the puck find its way through a mess of skates and sticks, under the sprawled out U.S. goaltender Alex Rigsby’s belly and, ultimately, across the goal line. However, as soon as officials pointed to centre ice to indicate the goal, the U.S. bench asked for a review for goaltender interference. Again officials ended up pointing to centre ice, after confirming there was no kicking motion by Nurse to send the puck into the net or that Laura Stacey (Kleinurg, Ont./Markham, CWHL), who initially came sweeping across the crease in front of Rigsby, caused goaltender interference.

After a scoreless first period, the U.S. broke the tie 2:05 into the second period. U.S. forward Hilary Knight pulled the puck away from another scramble in front of the net and passed it across the crease to Brianne Decker who punched it past Canadian netminder Ann-Renée Desbiens.

Another look at Decker's power-play marker to open the scoring. #TheTimeIsNow us pic.twitter.com/buRpwBnsoo

Haley Irwin (Thunder Bay, Ont./Calgary, CWHL) knotted the game 1-1 with 7:03 remaining in the middle frame with a solid individual effort. Skating the puck from behind the net, she swooped around U.S. players at the top of the face-off dot, across the front of the net and shovelled a back hand shot past Rigsby.

“It’s nice to get the win and we will definitely enjoy it but there is also things we have to keep building on. We are looking forward to the next game already,” said Irwin.

Almost time for puck drop in San Jose... 🇨🇦 vs. us! pic.twitter.com/0jkc4CLunC

Canada then took the 2-1 lead with Nurse’s goal with under two minutes to go in the second period. Canadian goaltender Desbiens came up with a big save that could have tied things back up as the second period was coming close to a close. Speedy forward Kendall Coyne hopped on a loose puck putting her on a shorthanded breakaway, but Desbiens (who had 25 saves on the night) stretched out as she got pulled from her left to right to make the save. It is the first time the goalie has earned a win against the U.S. with the national team.

“It was just awesome… I think that win was just a team effort. We were all over them from the first period until the end so I think overall we played a really good game,” said Canadian forward Mélodie Daoust (Valleyfield, Que./McGill University).

Canadian captain Marie-Philip Poulin (Beauceville, Que./Montreal, CWHL) scored Canada’s final goal early in the third period off a one-timer, in the team’s strongest game against the U.S. in the six game series. Canada held a 36-26 advantage in shots on goal.

“We just have to be better in the red zones, that’s the difference between winning and losing,” said U.S. head coach Robb Stauber,. “We’ll give some focus and energy to some things we think we can do better, and we’re going to go into Edmonton and see what that end result looks like.”

Canada now leads the six-game series against the U.S. 4-1 and return to action on Dec. 17 at 7 p.m. (EST) at Rogers Place in Edmonton, Alta. in what will be the final matchup between the two teams before the Pyeongchang 2018 Winter Olympic Games.

“I think it is going to be awesome. We have heard it is sold out. We are playing just right down the road from Calgary and really to play the last game at home it means a lot to us and we are excited to go to Edmonton,” said Irwin.

After dropping the opener of the six-game set, Canada now leads the series 4-1. Its latest win was its best game yet. The team held a 36-26 advantage in shots on net, and both Meghan Agosta (Ruthven, Ont./Hockey Canada) and Rebecca Johnston (Sudbury, Ont./Calgary, CWHL) rang pucks off the outside of the post.

Ice chips:
The U.S. women’s national team will play exhibition games against the best from the National Women’s Hockey League as a final tune-up before the Olympics.

The NWHL all-star team will be selected in consultation with coaches of all four franchises (Boston Pride, Buffalo Beauts, Connecticut Whale and Metropolitan Riveters) and will be announced before the end of the year.

Games will be Jan. 13 and 15 in Florida, where the U.S. national team is centralized. Tickets will be $10 each with 50 per cent of the proceeds benefitting the U.S. Hockey Foundation’s Friends of Women’s Hockey Fund.