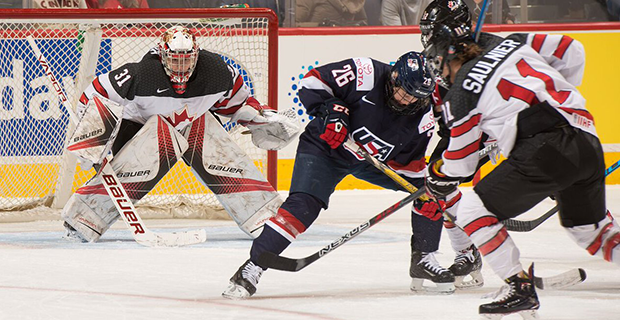 It was a scoreless game in the final minutes of the third period when Jillian Saulnier sent the already raucous crowd at Winnipeg’s Bell MTS Place into a frenzy.

Canada’s national women’s hockey team shutout the U.S. 2-0 in Game 4 of the exhibition series as the teams prepare for the 2018 PyeongChang Olympic Winter Games

Jennifer Wakefield (Pickering, Ont./Linköping HC, SWE) initiated the goal by creating a turnover along the boards then Saulnier (Halifax, N.S./Calgary, CWHL) picked up the loose puck and scored with a backhand from the low slot.

“It was definitely a special moment for me. It was a full line effort to get the goal in; Jenner got it in deep and Wakefield battled hard on the boards, and it popped out to me. To be able to put that in, hear that crowd roar and get one for the girls was pretty special,” said Saulnier on netting the game-winner with 3:10 left in the period.

Laura Fortino sealed the victory, giving Canada a 3-1 series lead, with 44 seconds remaining, banking the puck off the boards in the defensive zone into the empty net.

A few great scoring chances, but still deadlocked 0-0 with 6:03 to play. #TheTimeIsNow us

“The team played amazing; any rebound in front of the net we cleared it out. Everyone was doing their job in the defensive zone and it made my job easy. I’m really excited to get the team win and looking forward to our next game,” said Lacasse.

It is the second win for the goalie, who has stopped 69 of 70 shots in the two games she has appeared in for this pre-Olympic series.

Canada’s power play has taken a turn since allowing two goals in the series opening loss. Since then they have killed off 19 straight penalties. Their power play is still something they struggle with. Unable to score on five chances in this game, the team has only capitalized once in 15 tries in the series.

“The outcome is not what we want, but at the end of the day we have to look at our progress,” said Robb Stauber, U.S. women’s national team head coach. “We did some good things tonight, I think we did some things better tonight than we did two nights ago, but we ended up with the same net result, not scoring enough.”

For Bailey Bram (Ste. Anne, Man./Calgary, CWHL), playing in front of her hometown crowd was a full circle experience.

“It was something you dream about as a little girl. My mom sent me a picture last night of me 10 years ago when the world championship were here — I had a sign in my hand and my face painted. To be able to be here now and inspire the next generation was pretty special,” she said.

Last night was a dream come true. From the bottom of my heart, THANK YOU Winnipeg! ear_of_rice🇨🇦purple_heart pic.twitter.com/kkzZH5QoHN

Canada’s head coach Laura Schuler said the energy from the crowd was contagious and she could feel it on the bench that the team in front of her wanted to play at their best for the fans.

“It was amazing just jumping on the ice and seeing the red and white and having the crowd behind us was pretty amazing,” said Canadian captain Marie-Philip Poulin. “Every time you have the chance to play on home soil it is so special. Seeing the little girls with their bright eyes and cheering for us — there is nothing better than that to play in front of.”

The teams now take a 10-day break from each other. They next face off on Dec. 15 in San Jose, Calif.