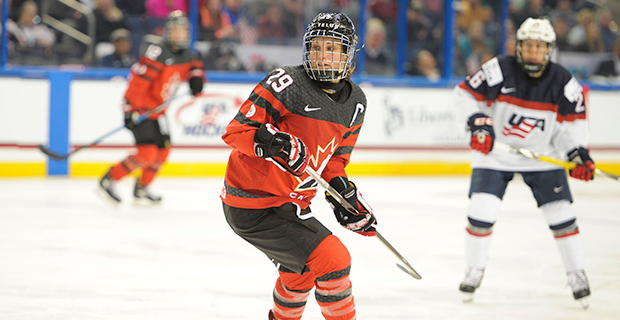 For the fourth consecutive 4 Nations Cup tournament, Canada has fallen to the U.S. in the gold medal match.

Penalty trouble late in the game and not capitalizing on the offensive chances they had was the common thread voiced from players and coaching staff after the 5-1 loss.

“I think it is a lot of things to take away. We had a good first period but we have to bury those chances. I think we know their goalie played really well but at the end of the second, third, we kind of came short with lots of penalties. We have got to be more disciplined. Going back to Calgary, we are going to have to focus on ourselves and know what we have to work and go forward,” said Canadian captain Marie-Philip Poulin following the game on Nov. 12 in Tampa, Fla.

The two teams have a few weeks to rest before they meet each other again on Dec. 3 at the Xcel Energy Centre in St. Paul, Minn. as part of their six-game series leading up to the PyeongChang 2018 Olympics.

The loss marks the third time the U.S. has earned the upper hand in four meetings so far during the lead up to the Olympics between two match-ups at the 4 Nations Cup and the six game series that began on Oct. 22. While Poulin was quick to point out that it is a long year leading up to the Olympics, she also added it is always frustrating to lose to the U.S.

“I don’t think you every really put a loss aside right away,” reiterated Team Canada forward Natalie Spooner. “We were prepared for this game and you try to live in the moment and play your best every game, so it’s definitely a disappointing game. I think we got ourselves into some penalty trouble at the end and it cost us the game. Moving forward, we obviously have some work to do and to improve until the next time we play the U.S. and eventually to the Olympics, we want to be the best we can be there.”

Both teams were kept off the scoresheet through the first period, despite trading great opportunities including a breakaway by U.S. player Kendall Coyne that was turned aside by Genevieve Lacasse (Kingston, Ont./Calgary, CWHL).

It took until just under five minutes to go in the middle frame when Hannah Brandt’s wrist shot from the slot gave the U.S. the one goal lead. Brandt struck again just over a minute later, but this time on the power play after collecting a rebound and burying it to put the U.S. up 2-0.

“It is a step in the right direction for sure, it just shows that we are continuing to get better and better every day, but we know that our competition’s out there doing the same thing. It is definitely a good step for us and a good test,” said Brandt.

Canada got on the board halfway through the third period connecting on the power play. Brigette Lacquette (Mallard, Man./Calgary, CWHL) delivered a cross-ice pass to Meghan Agosta (Ruthven, Ont./Hockey Canada), who rifled the puck past U.S. goalie Maddie Rooney from the slot to cut the U.S. lead in half.

Just like their 4-2 loss at the hands of the U.S. earlier in the tournament, Canada found itself in penalty trouble that broke the game open.

First, Hilary Knight put away a rebound. Amanda Kessel followed that up with a power play goal off a cross-crease pass, then Coyne struck again with a backhanded shot in tight with just 17 seconds remaining giving the U.S. the 5-1 victory.

“I think the biggest thing coming out of tonight was just the amount of patience we displayed as clearly the game opened up in the last seven-eight minutes,” said U.S. coach Robb Stauber. “But, in any situation we are just progressing towards February. That’s our main objective, to be the best we can be come February. Along the way, we have already taken some bumps and bruises and a loss that maybe we don’t like but we are able to use that, as any team would, as a stepping stone to say ‘hey we need to get better.’”

Poulin led Canada in scoring over the four games played at the 4 Nations Cup with seven points, followed by Agosta with six and Jennifer Wakefield (Pickering, Ont./Linkoping, Sweden) and Laquette each with five. Canada defeated Sweden 9-0 to open the tournament and Finland 4-0 in the preliminary round. Finland went on to defeat Sweden 2-1 in overtime in the bronze final.

Canada defeated the U.S. in the second game (Oct. 25, Boston, Mass.) of the six-game series 5-1. In that game Canada racked up nine penalties, but didn’t give up any goals to the U.S. while shorthanded. The two teams will meet on four more occasions before the Olympics, on Dec. 3, Dec. 5 (Bell MTS Place, Winnipeg, Man.), Dec. 15 (SAP Centre, San Jose, Calif.) and Dec. 17 (Rogers Place, Edmonton, Alta.).

Canada is also playing in the Where the Journey Begins Esso Series, a 24-game schedule against the Alberta Midget Hockey League male teams. Their last game in that series will be played on Jan. 21.