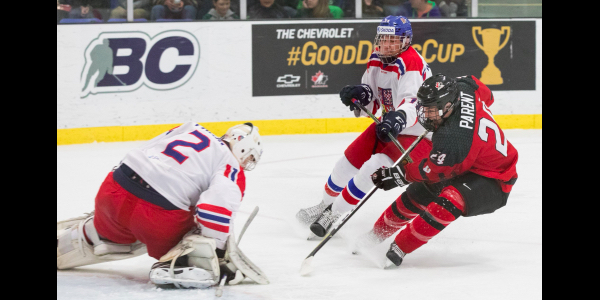 Xavier Parent and Team Canada Red will go up against Jack Hughes and the United States in the World Under-17 Hockey Challenge final. (Matthew Murnaghan/Hockey Canada Images)

There’s a daunting task ahead of Team Canada Red as it goes for gold Saturday night at the World Under-17 Hockey Challenge tonight in Dawson Creek, B.C.

While they battled back from a 1-2 record after the round-robin to reach the final, they’re set to go up against the undefeated Americans, who have steamrolled through the playoffs, outscoring Sweden and Canada White by a combined score of 14-2.

Jack Hughes in particular has been amazing for the States. HockeyNow’s 2017 Minor Hockey Player of the Year for Ontario has a tournament-leading 11 points (four goals and seven assists) and has four multi-point efforts in five games. That includes three assists in Friday’s 9-1 semifinal win over Canada White.

Hughes was born in Orlando and lived in Boston up until his family moved to the GTA as a youngster. He grew up playing AAA for the Mississauga Rebels and Toronto Marlies.

The Americans also have second leading scorer Cole Caufield, who also has four multi-point efforts, five goals and five assists overall. Matthew Boldy and Trevor Zegras have also been strong for the States with six points a piece.

Canada Red has been led by Xavier Parent (Halifax Mooseheads), who scored the semifinal winning goal in a 3-2 decision over the Czech Republic. He’s third in tournament scoring behind Hughes and Caufield.

Goaltending has been strong for both teams.

American goalies Cameron Rowe and Spencer Knight have goals against averages of 1.95 and 2.33 respectively while Canada Red’s Luke Cavallin has a 2.50 GAA to go along with a .919 save percentage. Rowe’s save percentage stands at .925.

Before finals, Canada White and the Czech Republic will face off for bronze.

Jakob Pelletier (Moncton Wildcats) has led the Canadians with four goals while Taylor Gauthier (Prince George Cougars) has been impressive in goal, aside from the 9-1 loss to the States.

The Czechs have been led by two goals and an assist from Martin Lang.

Back to Top
By Iain Colpitts| November 11, 2017
Categories:  Major Junior|Events