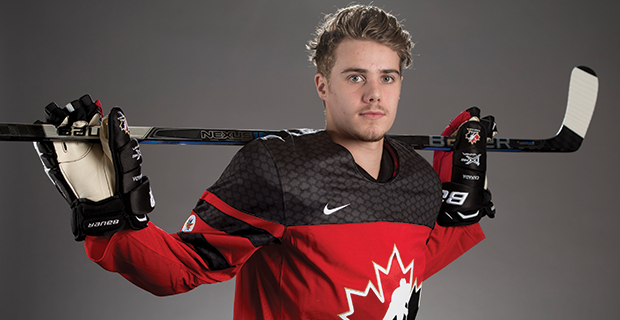 Team Canada took care of business in their final World Junior Championship round-robin game and secured the top seed in Pool A as a result.

Seven different players scored Saturday as the Canadians cruised to an 8-0 win over Denmark.

On Friday, Canada’s 4-3 shootout loss to the United States may have stung a bit, the Canadians were still in first place afterwards because both of their wins were in regulation while the U.S. left a point on the table by failing to win that game in regulation.

While many felt a win over the Danes was a foregone conclusion, Canada used the game to show off its balanced scoring attack.

Brett Howden led the way with a pair of goals, Alex Formenton and Michael McLeod had a goal and an assist and Robert Thomas, Sam Steel, Drake Batherson and Cale Makar also scored.

Through four round-robin games, every Canadian forward has at least a goal except for Tyler Steenbergen, the WHL’s leading goal scorer with 35 goals this year.

Carter Hart had a relatively easy night in goal, finishing with 18 saves while Emil Gransoe faced 44 shots in goal for Denmark, which has been outscored 21-1 in this year’s tournament.

A lot of Canada’s offence against Denmark came from the defence as well.

Cal Foote recorded three assists and every defenceman had at least a point, except for Victor Mete and Dante Fabbro, both of whom saw limited action as coach Dominique Ducharme opted to rest them and allow some injuries to heal with the game well in hand.

Fabbro missed the pre-tournament games recovering from a lower body injury and is still getting back into game shape while reporters say Mete was seen limping after Friday’s loss to the U.S.

Ducharme downplayed those ailments, saying he wanted to make sure they were 100 per cent healthy for Canada’s quarterfinal game on Tuesday.

As the top seed in pool A, Canada will face the fourth seed in Pool B, which will either be Switzerland or the Czech Republic, depending on results from Sunday’s slate of games.

Canada has made it through the round-robin with strengths in many areas, including special teams. They boast the tournament’s top power play, converting at a rate of 53.33 per cent, and their 81.25 penalty kill percentage is second only to Russia by a slim margin.

Over the past three tournaments, the gold medalists have also boasted the best power play. That includes Canada in 2015, Finland in 2016 and the U.S. last year.