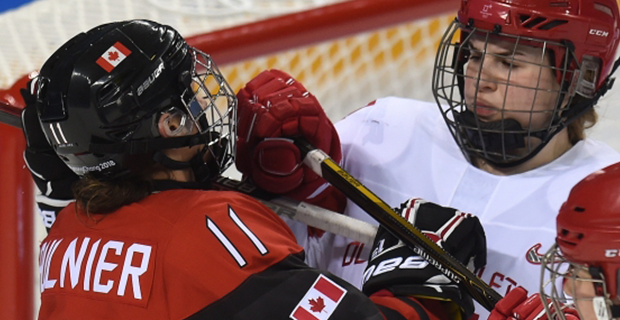 Jillian Saulnier battles with an Olympic Athlete from Russia player in front of the net in their first game at the 2019 PyeongChang Olympics. Canada won 5-0. (Photo courtesy of FHR.RU)

Canada’s national women’s team opened their Olympic tournament with a 5-0 win over the Olympic Athletes from Russia.

Canada outshot OAR in the first period 15-5, but could not get an advantage on the scoreboard as both sides were blanked.

That all changed 1:55 into the middle frame with Jillian Saulnier (Halifax, N.S./Calgary, CWHL) and Brianne Jenner (Oakville, Ont./Calgary, CWHL) aggressively on the forecheck. It was Jenner who ended up with the puck and centred a backhanded pass right to the stick of Rebecca Johnston (Sudbury, Ont./Calgary, CWHL), who one-timed it over the pad of the OAR netminder just inside the post giving Canada the 1-0 lead.

A powerplay opportunity resulted in Canada adding another to increase their lead by 2. Johnston grabbed a stray puck just inside the blue line and let a hard shot go that was tipped in front of the net by Hayley Irwin (Thunder Bay, Ont./Calgary, CWHL) and passed by the OAR goalie at 4:13.

“I was really happy with our first period, we came out strong and had a lot of really good looks and scoring chances. I was happy to see our special teams execute tonight, that’s obviously really important for us and for our specialty teams,” said Canada’s head coach Laura Schuler.

Melodie Daoust (Valleyfield, Que./Montreal, CWHL) redirected a pass at the top of the OAR crease and into the net, making it 3-0 for Canada as the middle frame came to an end.

“We played well on defence but when we made mistakes, we gave up goals,” OAR’s Maria Batalova told the IIHF. “Physically it’s tough because they’re a little bit quicker than us. They were playing with four lines and we had three, so we got a bit tired towards the end. But of course we tried to play hard against them.”

Johnston struck again in the middle of the third period while on a five on three powerplay. From a bad angle, Johnston managed to find the top corner of the net, giving Canada a 4-0 lead.

Daoust put her second goal of the game in at 10:44. Canadian captain Marie-Philip Poulin (Beauceville, Que./Montreal, CWHL) collected three assists in the win.

Goalie Ann-Renée Desbiens (La Malnaie, Que./University of Wisconsin, WCHA) turned aside 18 shots to earn the shutout in her Olympic debut.

“It was definitely nice to have that first opportunity; to wear the Maple Leaf has always been a dream,” said Desbiens.

U.S. Opens with a Win
In the earlier game, Finland jumped out to an early lead 1-0 over the U.S. but the Americans snapped back to win the game 3-1.

“I am very thankful for a hard-fought game,” said U.S. women’s Olympic coach Robb Stauber. “It was tough, and it should be tough to win here. It was a great game for us and now we get to move forward to the next one.”

Finnish forward Venla Hovi (whose club team is the University of Manitoba Bisons) scored with just six seconds left in the first period to give them a 1-0 lead.

Goaltender Noora Raty turned aside a surging U.S. but couldn’t keep them completely off the board. Monique Lamoureux-Morando ended up with the puck on her stick after a scramble in the corner. She cut to the net and gathered her own rebound to even the game 1-1.

Just 2:30 later, Hilary Knight delivered a pass across the ice to Kendall Coyne who fired a one-timer past Raty to give the U.S. the lead.

Finland pulled Raty with just minutes left in the game trying to score the equalizer. However, with 13 seconds left on the clock, Dani Cameranesi put the game out of reach with an empty net goal. The U.S. outshot Finland 42-24.

“I definitely think getting more shots is something we have been focusing on. Noora is a great goalie so we knew we would need to get a ton of shots in order to score. It is smoothing again we will be focusing on in the next games,” said U.S. defenceman Lee Stecklein.

Other Preliminary Round Play
Group B action got underway on Feb. 10 with Sweden opening the tournament up with a 2-1 win over Japan.

Sweden got on the board first with a goal from Fanny Rask just 2:21 in to the game. Japan evened things in the second period 1-1 with a goal from Rui Ukita. It was early in the third period when Sara Hjalmarsson lifted Sweden back into the lead 2-1 with her eventual game-winning goal.

Korea was outshot 52-8, and Florence Schelling earned both the shutout and tied an Olympic record herself — most shutouts (four). Switzerland were the bronze medallists in 2014, defeating Sweden 4-3.