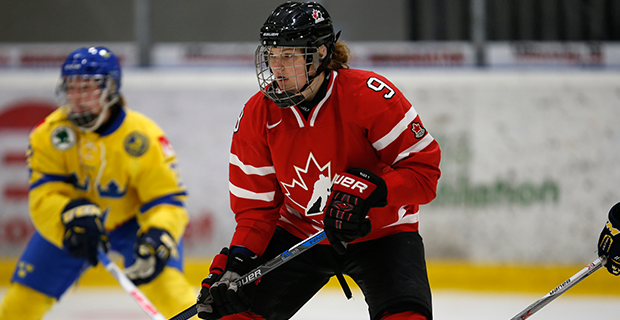 Jennifer Wakefield is representing Canada at the Olympics for the second time, after bouncing back from an Olympic dream-ending injury in 2009/2010 to help Canada win gold in Sochi in 2014. (Joel Ford/Hockey Canada Images)

One team plans to defend their title and the other desperately wants to get back on top of the Olympic podium. The only thing separating them is the 49th parallel.

And, for both the U.S. and the Canada (the No. 1 and 2 ranked women’s hockey teams in the world), the anticipation for the rivals to clash on the ice is staring them right in the face.

“We have this giant whiteboard that has a countdown to PyeongChang. I remember looking at it and seeing 180 days and thinking ‘wow, that’s crazy.’ I remember being two years out and one year out and now all of a sudden we are here,” said Team Canada forward Jennifer Wakefield.

A six-game exhibition series, to be played across multiple cities in Canada and the U.S. will take place first before they head to the Olympics.

Canada will host the U.S. on Oct. 22 in Quebec City at the Videotron Centre, Dec. 5 at Bell MTS Place in Winnipeg and the final site is to be released soon. The U.S. will host on Oct. 25 in Boston, Massachusetts, Dec. 3 in St. Paul, Minnesota and Dec. 15 in San Jose, California.

Canada’s four-month lead up to the Olympics, dubbed Where the Journey Begins by Hockey Canada, also features a 24-game schedule against opponents in the boys AAA Alberta Midget Hockey League while the team is centralized in Calgary. A similar plan to the lead up to their gold medal wins at the past two Olympic Games. Canada’s 28-player roster will stick with them through the 4 Nations Cup, to be played November 5 to 12 in Florida where the U.S. team in centralized. The U.S. will carry the the required 23 players (21 who won gold at the 2017 world championships and 12 who won silver in Sochi) for the Olympics, and no more.

For Wakefield, her journey began long before the September announcement of their tour. It was in 2002 when she watched Canada win their first gold medal in women’s hockey.

“I knew I wanted to eventually play on the national team right then,” said Wakefield. “I have a very patriotic family and my parents always hung a big Canada flag up at our house and seeing that every day instilled a huge Canadian pride in me.”

While Canada has the upper-hand at the Olympics, they have been shut out from a golden bauble at the IIHF Women’s World Championship at the past four tournaments. And, in 2017 they lost for the first time in 21 meetings (dating back to 1990) against Finland.

“We were definitely pushed, but we are not broken. The world championship loss is extra motivation to fight for Olympic gold,” said Wakefield.

On the other side of the border is a team that seems to have all the confidence in the world, yet has fallen short of their ultimate goal.

The U.S. tour, titled by USA Hockey as The Time Is Now, couldn’t be any more poignant for U.S. defenceman Kacey Bellamy, owner of seven gold medals from the IIHF Women’s World Championship medals and two Olympic silver medals.

Bellamy said every medal has brought a lesson and she doesn’t take any of them for granted. At Vancouver 2010, she came in as a wide-eyed first-timer to the Games, soaking in the experience with her teammates. At Sochi 2014, Bellamy said the team clamped down on extra-curricular activities and was there with just one job on their minds. However, both situations came with the same heartache.

Now, coming just inches short replays in their mind from a game they led for most of the way at the last Olympics. A game where Canada mounted a comeback first when the puck ricocheted off the knee of Bellamy and into the net. Then U.S. failed to finish Canada off when a lob to clear the zone by forward Kelli Stack hit the post of the empty net when Canada pulled their goalie for an extra attacker in the third period.

“I think about the journey and everything all the time. The losses that I’ve had from Vancouver and Sochi are very tough but you move on from them, you learn from them and that is the biggest thing,” said Bellamy.

Dominating Canada at the world championship has helped. Especially last March when the U.S. hosted the world in Michigan and took a big step for women’s hockey. On the eve of possibly not being able to roster a team, when the women stood their ground and said they would not play unless change in the form of equality to their male counterparts, the standoff ended. USA Hockey signed a four-year deal that promises their national team members a better financial situation, bonuses for winning medals, plus the formation of an advisory group, amongst other benefits.

“It is a relief because in 2010 and 2014, we were still dealing with contracts at this exact time when we were just getting centralized. It was such an iconic moment for women’s hockey and it needed to happen,” said Bellamy. “We didn’t need it to go all the way to residency and centralization, that is why we did it because we wanted to move on and focus on the team and the goal ahead.”

Both teams can check pride, humility, passion, work ethic off their list of similarities — where their differences come will be tested in the next four months and ultimately, they hope and expect, on Feb. 21, 2018 when one team will skate away with the gold medal around their necks.

The Journey Begins
In an effort to promote grassroots hockey, Where the Journey Begins will also leave a legacy within the Southern Alberta hockey community with local minor hockey associations joining forces to take part in a major fundraising campaign.

“I think it is awesome we are doing this tour because you never know what impact you leave each game. I hope that maybe we can instil the same dreams we had to every girl that watches. It just means that many more female players will want to pick up the game, maybe get an education while playing hockey in college and maybe go down a path that we did,” said Wakefield.

For every $10 ticket sold to any of Team Canada’s home games at WinSport’s Markin MacPhail Centre in Calgary, $7.50 will return directly back to the selling local minor hockey association.

“Our play against the Alberta Midget Hockey League is instrumental in our team’s preparation for the 2018 Olympic Winter Games and wouldn’t be possible without the support of the league and its players,” said Melody Davidson, general manager of national women’s team programs. “This series is a great opportunity for fans across Alberta to be part of Team Canada’s journey to PyeongChang and the support we receive from communities across Alberta will certainly fuel our team as it moves forward.”

The 2018 Olympic women’s ice hockey tournament will be played according to the same format used in Sochi 2014 with two groups of four teams each. The four teams from Group A and the top two teams from Group B will advance to the final round with the top two teams of Group A set for the semifinals. The top five nations of the 2016 IIHF Women’s World rankings automatically qualified, two qualifiers will be determined in three stages of the Olympic qualification.

The puck drops for the first women’s hockey game at PyeongChang on Feb. 10, 2018 and the No.1 and 2 ranked teams in the world will meet Feb. 15 to close out the preliminary round.