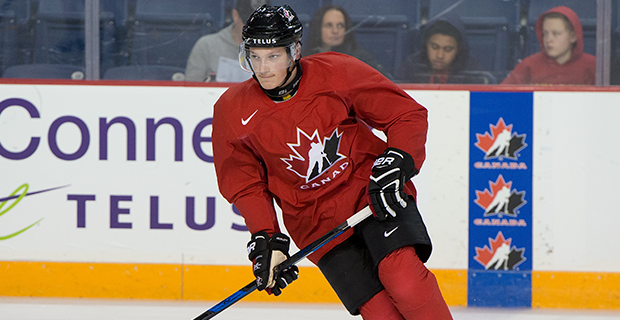 Cale Makar will be donning the maple leaf for the third time‚ but this year he makes his first appearance on the World Junior squad. Makar was the fourth overall draft pick of last NHL's draft and will be a key component for Canada at the World Juniors in Buffalo. (Hockey Canada Image)

Last fall, the thought of Cale Makar suiting up for Team Canada at the World Juniors, even this year, might have seemed far-fetched since he was a relative unknown playing Junior A.

It was a meteoric rise for the mobile defenceman last season, going from a fringe first round NHL draft pick before being selected fourth overall by the Colorado Avalanche at last year’s draft.

He took an unconventional route to hockey stardom, spending his junior hockey days with the Brooks Bandits of the Alberta Junior Hockey League (AJHL) before making the jump to the NCAA. Now, he’ll be in the national spotlight for the first time, patrolling the blueline for Canada.

Makar is in his first year at the University of Massachusetts–Amherst playing with the Minutemen. He’s appeared in all 16 games and has record the fifth-most points in the team and first for defenders.

His head coach at university, Greg Carvel, said Makar is often the best player on the ice, but has been working on several facets of his game.

“I think this is a great spot for him right now, he plays about 27 minutes a night, runs our first powerplay, he’s on the penalty kill and plays every situation,” Carvel said. “It’s great for his development. He’s playing against older kids, stronger kids and that’s exactly what he needed for his next stage of development.”

Formerly an assistant coach with the Ottawa Senators, Carvel saw coached Erik Karlsson for parts of two seasons and sees some of the Swede in Makar.

“Their style and skillset is similar. Erik is an elite puck mover and has the ability to see the ice and his puck skills are elite. Cale is a better two-way player, he’s more committed to play without the puck. He is more committed to being an all-around player. The thing they have in common is that they have a very sound understanding of what they’re capable of doing. They have a confidence in their game,” Carvel said.

A Calgary native, Makar chose to play Junior A in Brooks, just under two hours away from his home. He was selected in the eighth round of the 2013 WHL draft by the Medicine Hat Tigers, but he never signed.

As a 16-year-old, Makar played three regular season games for the Bandits, scoring five points. He stuck for the playoffs and had seven in 20 games.

The next year, as a full-time player, Makar had 55 points in 54 games and was named the AJHL and CJHL Rookie of the Year, as well as the RBC Cup MVP, among other achievements.

In his draft year last season, Makar was head and shoulders above his peers. His 24 goals and 75 points were tops among defenders, and he ranked sixth overall in AJHL scoring. His playoff run included more than a point-per-game average, and he also lit it up at the Western Canada Cup and RBC Cup. Awards last season included AJHL MVP, RBC Cup MVP, RBC Canadian Junior Hockey Player of the Year, plus a second-straight AJHL Championship with the Bandits.

However, Carvel noted Makar faces stouter competition in the NCAA.

“When I went to see him play last year, he could skate the puck from face off dot to the other end without really getting checked,” Carvel said.

INTERNATIONAL PLAY
Makar has donned the red and white before, playing for the maple leaf in the past two World Junior A Challenges. In 2015-16, he potted one goal and came home with gold around his next. The following year, he was captain and wowed the hockey world, recording four goals and eight points in four games, finishing tied for fourth in scoring. However, the team didn’t medal.

After his five-point opening game at the WJAC in 2016, TSN’s Bob McKenzie wrote an article on TSN, claiming numerous NHL scouts thought Makar should be lacing up for the World Junior Championship later that month, however camp was already underway.

Now, he’s set to likely run the first powerplay unit, and be a top two or four defenceman.

Few AJHL players have played in the World Juniors. Recently, Brandon Hickey (two AJHL seasons), Brayden Point (four AJHL games) and John Quenneville (nine AJHL games) suited up in 2015-16. Dylan Olsen, a first rounder with two AJHL seasons, also joined the squad once in college back in 2011. All made the team once their AJHL time had come to a pass.

College players aren’t as rare for Canada, but there are always significantly more from major junior. The team hasn’t had three NCAA players on the team since 2007, so with Dante Fabbro (barring bad news on the injury front) and Colton Point joining Makar, it’s the most in a decade.

The last time Canada had two NCAA players on the blueline? 1990.

There were almost four college players, as Makar’s college teammate, Mario Ferraro, was one of the final cuts on defence.

As previously mentioned, Makar was the fourth overall draft pick. Players selected that high don’t stay at college past a year or two. Carvel admits this, but says Makar’s dedication doesn’t reflect this.

“He is doing well in school, he doesn’t take shortcuts in anything, knowing he won’t be here for four years,” Carvel said. “He handles himself, he’s as conscientious as a student-athlete you can have. That to me speaks a ton about his character. He does a tremendous job of living in the now.”

A native of Canton, NY, Carvel may question his patriotism when Canada and the US on Dec. 29 when the teams play, but said he’s loyal to his players.