Ask a Coach: Kris Mallette on Keeping the Players Organized 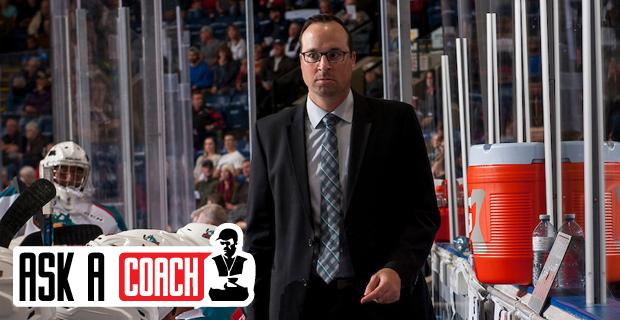 Kris Mallette played for nine teams in five leagues in under a decade, including the Kelowna Rockets from 1996 to 1998. He returned to the WHL and the Rockets in 2013 as an assistant coach, and has been with the team ever since. (Marissa Baecker/Kelowna Rockets)


In partnership with The Coaches Site, HockeyNow is helping you get the inside scoop from some of the country's biggest names in coaching. Every month, we’ll be exploring prominent themes and issues in our Ask a Coach series.

Kelowna Rockets Assistant Coach Kris Mallette has seen a lot in his career. From playing junior hockey with the Kelowna Rockets to coaching the Western Hockey League powerhouse, Kris played for nine teams in five leagues in under a decade.

You could say his apprenticeship has been fulfilled and then some.

Throughout his career, Kris has seen different approaches to the game and different tactics used by coaches to get the most out of their players.

So what did he learn? We caught up with the Kelowna native to learn about game day tricks, practice habits, and a sneaky method to make sure teenage boys are on time for meetings.

Kelvin Cech, The Coaches Site: What’s a typical practice day look like?
Kris Mallette: We’re in a unique situation, our practice schedule revolves around a floating block that all of our players have as a spare. That varies day to day. We have four varying practice times throughout the day. We get here around 7:30 or 8:00 in the morning, we talk, we rehash our practice plan based in previous games and what we feel needs to be addressed. Typical work days early in the week and then we ease into more flow, special teams, and higher intensity later in the week.

What about game days? Everyone loves their routines...
Usually we skate at ten in the morning, three quarters of the team, some guys are in school, so if it’s a weekday then their priority is school. Our guys get in at nine, I run my penalty kill meeting then. I have my meetings at random times, usually odd numbers, like 9:13am.

Seriously?
Yep. It makes them think instantly. It’s just a five or 10 minute meeting, but no one is ever late because you don’t forget the time of the meeting when it’s weird and random. I can’t remember where I got that one from.

Well I’m stealing it now for sure.
(Laughs) No problem, let me know how it goes.* So after the meetings we’ll go out for a real short skate, maybe 15 or 20 minutes. A few players will stay out, maybe the scratches and an extra goalie if possible and we’ll play a little 3-on-3. After that we finish up our lineup cards and we’re out of there by about noon. I go home and come back about ten to four, where we meet casually and finish whatever prep we need for the game. We each have things we’re responsible for so we go over clips with players again if we need, and then we’ll have a powerplay meeting at 5:20, regular meeting at 5:30.

The reality of junior hockey is that you’re always welcoming new players into the fold. What do you look for when you’re deciding whether a player is ready or not?
First and foremost we depend heavily on our scouting staff. They do a great job before every season, they define hockey IQ, they find us players who can skate, and then it’s really up to us to teach and get them to the point where they’re ready. It’s tough to define because every player is so different. It’s a matter of how that message is being sent, some are visual, some can just talk face to face, a lot have to see it out on the ice. That’s repetition and us as a staff and finding players who pick it up the quickest. The ones who can pick it up are generally rewarded only because they display that they’re ready for more responsibility. It’s tough, a lot of the players forget what day it is, let alone something more complicated like keeping up with the systems we run.

For us, it’s constant reinforcement, repetition, and you want to build that relationship and demonstrate trust and let them know you’ve got their best intentions in mind. Some take longer than others. That’s hockey. It’s a process.

There are always big expectations in Kelowna. Do you take a day-to-day approach or do you like the pressure of the big picture expectations?
Early on we’re a big picture staff. We have an end goal that’s been built from within. We don’t rebuild, we’re a team that retools. That pressure and that type of success we look for is part of the culture, it’s ingrained and it helps us define the type of people we want to bring in here. As a staff, yes ultimately we want success, but we can’t look far ahead. It’s great to have goals first and foremost, but it’s a process to get there.

We can talk about wanting to make it to the Memorial Cup but there are so many steps in between, so many hurdles. Myself and our other assistant coach, we were fortunate to go through it our first year, but as long as each day we’re getting better, the questions are being answered, and hopefully by the end of March we’re firing on all cylinders.

Kris, thanks so much for the time. I have to go now, I have a meeting with the defence at 2:13.
You’re welcome, and alright, I won’t forget.
*Everyone was on time.