All Eyes on Hischier in First Season After Historic NHL Draft 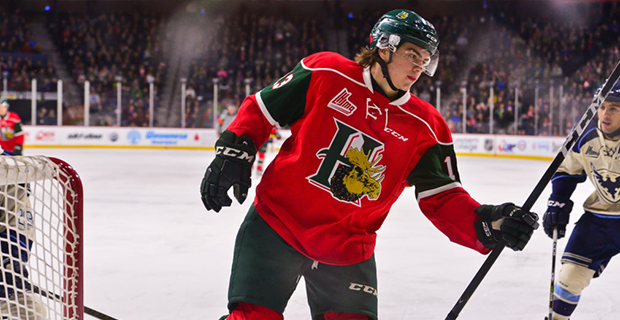 Nico Hischier likes to do things in hockey that nobody else has been capable of achieving.

First and foremost, the Halifax Mooseheads centre was selected No. 1 overall by the New Jersey Devils at the 2017 NHL Entry Draft becoming the first player from Switzerland to earn that lofty distinction.

The Swiss native also got the nod as the inaugural QMJHL player to be drafted with the first pick who was not born in Quebec, Nova Scotia or Ontario after tearing it up last season in Halifax.

They are pretty impressive achievements for a kid who last year came over from Europe to adapt to a foreign land and play in the CHL.

After making the big move across the Atlantic Ocean and setting up residence in Halifax, Hischier hoped but probably never expected to have the success he experienced in the QMJHL.

Hischier began his path to stardom when Halifax selected the 6’1”, 176 lb. centre sixth overall in the 2016 CHL Import Draft.

Hindsight is 20/20 but you have to wonder what the teams with the first five picks were thinking when they decided to pass on Hischier.

Scouts, GMs and head coaches see things differently but prior to the 2016 CHL Euro Draft,  the promising Devils centre has already made his pro debut in Switzerland in 2015, spending time in the top-tiered National League A (NLA) and the second-tier National League B.

Prior to Hischier, a collection of three Russians and two Czechs were selected before the native of Naters, Switzerland saw his name pop up on the CHL website.

Hischier was sold on the idea of moving to Canada’s East Coast and the City of Halifax after discussing his future with Halifax's general manager, Cam Russell and former Mooseheads player Timo Meier.

Meir is also from Switzerland and has been with the San Jose Sharks for the last two seasons.

Hischier made the NHL scouts stand up and take notice especially New Jersey after finishing in tenth place overall in QMJHL scoring, with 38 goals and 86 points leading all QMJHL rookies in both goals and points.

For his achievements, he was awarded the RDS Cup as the QMJHL Rookie of the Year and the Michael Bossy Trophy as the best pro prospect in the league. Hischier also earned a spot at centre on the QMJHL Rookie All-Star Team.

He added to his trophy collection when was named the 2016-17 CHL Rookie of the Year.

There’s no disputing the fact that Hischier had an incredible season in the QMJHL but what probably solidified his status as a legitimate first overall pick was his performance at the 2017 IIHF U20 Championships.

He represented Switzerland at the 2017 World Juniors, scoring four goals and had seven total points in five games, the most by any player eligible for the 2017 NHL Entry Draft.

Over the years, the QMJHL has had twelve players selected first overall in the NHL Entry Draft but they were either from Quebec, Ontario or Nova Scotia.

Hischier changed that dynamic instantly because of his Swiss birthplace.

In 1968, the Montreal Canadiens got things started when they drafted G Michel Plasse from his hometown Drummondville Rangers.

Montreal was busy in 1969, 1970 and 1971 when they drafted forwards Rejean Houle (Rouyn-Noranda, Que.) and Gilbert Perrault (Victoriaville, Que.), both from the Jr. Canadiens, and Guy Lafleur (Thurso, Que.) from the Quebec Remparts.

C Dale Hawerchuck (Toronto, Ont.) was the first overall selection by the Winnipeg Jets in 1980 while playing for the Cornwall Royals who played in the ‘Q’ from 1969 to 1981.

In 1984, the Pittsburgh Penguins made C Mario Lemeiux (Montreal, Que.) the first pick after tearing up the QMJHL as a member of the Laval Voisins.

In the 90’s, C Alexandre Daigle (Laval, Que.) was the NHL’s first pick by the Ottawa Senators in 1993 after a junior career with the Victoriaville Tigres.

C Vincent Lecavalier (Isle-Bizard, Que.) was picked first overall in 1998 by the Tampa Bay Lightning from the Rimouski Oceanic.

G Marc-Andre Fleury (Sorel, Que.) was the first player called at the 2003 Draft by the Pittsburgh Penguins after a stellar junior career with the Cape Breton Screaming Eagles.

Arguably the best player in the world, C Sydney Crosby (Cole Harbour, N.S.) was the unanimous first pick in 2005 by Pittsburgh after scoring 303 points in two seasons with Rimouski.

Hischier continues to make headlines with the Devils in the preseason. He’s a lock to start the season in New Jersey and even though there’s a long road ahead, may have a head start on NHL Rookie of the Year in 2017-18.