Alberta Team to Beat after Two Days of 2017 WHL Cup 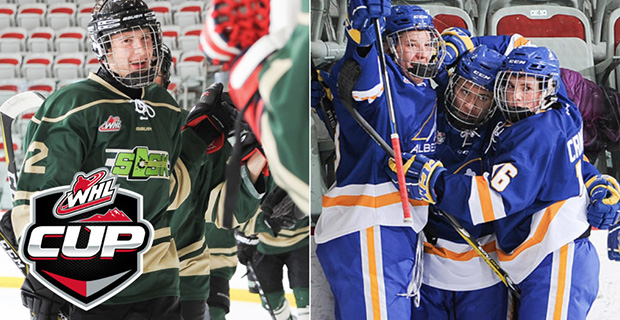 Saskatchewan and Alberta both got wins at Day 2 of the WHL Cup, but it’s Team Alberta that is off to the stronger start, having won their first two and scored 14 goals combined across the two games. (Courtesy of WHL/Derek Leung)

Two games into the 2017 WHL Cup and Team Alberta is backing up the hype behind their team with two commanding wins so far.

With 11 first round draft picks in the lineup, Alberta has scored at will and shown why they are the favourites. Manitoba and Saskatchewan each have a win, while B.C. is winless in two, including a shootout loss.

The tournament, which features the top 2002 players from Canada’s four western provinces, kicked off Wednesday in Calgary at WinSport. Alberta, who has won the past two tournaments, has been cruising.

The WHL Cup opened with an entertaining and competitive game, seeing Manitoba take on B.C. All goals were scored in the second, with the teams answering back after the other scored. 4-4 after 60 minutes, the game went to a shootout, which Manitoba was able to come out victorious. Both goalies played well, with Koen MacInnes stopping 22 of 24 shots for B.C. and Nikulas Jerris turning away 27 of 29 on the other side. Manitoba’s Luke Benedictson had a goal and assist.

Game 2 saw Alberta face Saskatchewan and torch them. After leading just 1-0 after the first, Alberta scored three in the second and four in the third enroute to an 8-3 victory. 2017 No. 1 overall pick in the WHL Draft, dman Kaiden Guhle, had two goals, while Noah Boyko had three points.

Thursday afternoon brought together Manitoba and Saskatchewan for an eastern rivalry. Despite recording 30 shots to Saskatchewan’s 19, Manitoba had a hard time getting pucks past Bryan Thomson as Saskatchewan won 4-3 The difference was special teams – Manitoba went 0-3 on the powerplay and Saskatchewan was 2-4. Ethan Ernst had two goalies in his team’s victory.

The Thursday night matchup pitted Alberta against B.C. and it was the marquee round robin matchup. The teams had the highest draft picks in their lineups of the four teams and it was expected to be a wild one. Behind the fearsome line of Connor McClennon, Kyle Crnkovic and Jake Neighbours, all top 10 picks in the draft, Alberta played two dominant periods, leading 6-1 after two. B.C. would add their second goal in the third, but it was too late. Crnkovic had four points, McClennon had three, Neighbors had two and Guhle added his third goal of the tournament in the 6-2 Alberta victory.

Going into the semifinals on Saturday, the battle for second is a wild one. On Friday, winless B.C. plays 1-1 Saskatchewan at 3 p.m., then Alberta will try to stay undefeated as they play 1-1 Manitoba at 6:30 p.m.

Saturday will see two semifinal games. First place plays fourth and second and third will clash with a spot in the finals on the line. Given Alberta’s high-scoring so far, they should be the number one seed, while the other three fight to avoid Alberta in the semis, in hopes of facing them in the finals on Sunday.

Through two games, Alberta’s Crnkovic is first in scoring with five points, while teammates McClennon and Guhle lead in goals at three.