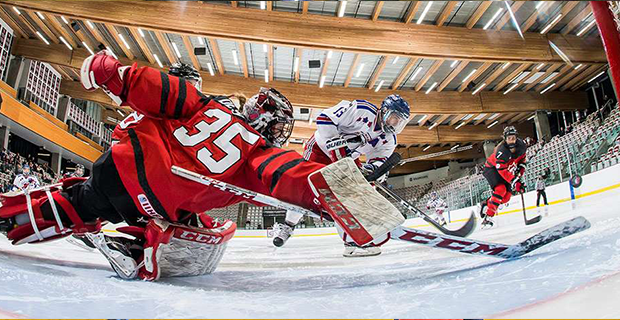 In preparation for the 2018 Winter Olympics in PyeongChang, the Canadian Women’s National Team have been centralized in Calgary and are playing a circuit against the top Midget league in Alberta. (Hockey Canada)

All 18 teams in the Alberta Midget Hockey League (AMHL) are welcoming a new opponent this season – one with older, more experienced players gearing up for something they’ve worked towards their whole lives.

The Canadian National Women’s Team (NWT) who will be competing in the Winter Olympics in PyeongChang, South Korea this February, have an exhibition schedule against Alberta’s top Midget league.

For NWT, it’s an important tune up for the Olympics, and for the AMHL players, they get a look at how truly talented these women are.

Team Canada centralizes in Calgary during the Olympic year, meaning players leave their current teams – some in the CWHL and NWHL, others in college – and train, practice and play exhibitions up until the Games.

There are nine home games for the women’s squad, all played at the Markin McPhail Arena located at Canada Olympic Park’s WinSport facility. Then, they play around the province, including Edmonton, Lethbridge and other cities.

The series, titled Where the Journey Begins and presented by Imperial Oil, started Oct. 3 with an exhibition game at WinSport and the women easily defeated Airdrie 9-1.

However, the games quickly turned to league play, where AMHL teams get points in their standings for the results of the games. The results have been much closer.

NWT won their opener against Grand Prairie with a 5-3 win on Oct. 6 before falling 4-3 to Sherwood Park the following night. Through nine league games, Canada has a 5-1-3 record. They have four more games in December, then will conclude with the final five in January before their trek to Asia.

Marie-Philip Poulin and Natalie Spooner lead the women in scoring with 11 points apiece in nine games, followed by Meghan Agosta and Jennifer Wakefield at 10.

Outside of the competition, these hockey teams also benefit from a unique fundraiser. For every $10 ticket sold, the team keeps $7.50. It’s a great way for family and friends to both support the players, but also get a close look at the Canada ahead of the Winter Games.

Having won four consecutive gold medals, expectations are sky high for the red and white, but don’t expect these Midget teams to roll over for them. Lethbridge, currently first in the league, defeated the women 3-1 behind 34 shots. However, the second-place Calgary Buffaloes fell 4-3 in an overtime game.

One thing is certain. Clearly Canada can keep up with the top 15-, 16- and 17-year-olds in the Wildrose Province.