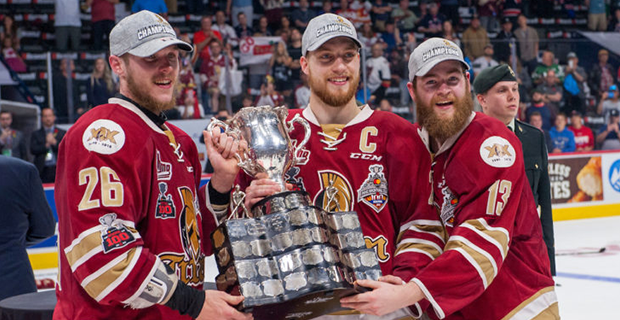 For the first time in their history, the Acadie-Bathurst Titan has won the Mastercard Memorial Cup.

The Titan captured the 100th edition of the tournament with a 3-0 shutout over the Regina Pats in the championship final.

The WHL Pats played host to the historic event in Saskatchewan’s capital, falling short in their effort to win their fifth Mastercard Memorial Cup which would have ended a 43-year drought.

The QMJHL champions capped off a tremendous week of play with a Canadian Hockey League Championship which the team will bring back to Bathurst, New Brunswick.

The tiny town in Northeastern New Brunswick is the smallest market in the CHL with a population of approximately 12,000 people.

“Winning this tournament gives hope to all the small markets, if you have a plan it doesn’t matter,” explained Titan head coach, Mario Pouliot.

“We play in the Maritime Division and always face big market teams like Halifax, Moncton and Saint John. It’s really important for us to have a plan, then follow and adjust it when needed.

“It was very important to bring in players with the right attitude like Jeffrey Truchon-Viel who grew as our leader. Seeing him raise the Memorial Cup is great because he deserves it.”

The Titan opened the scoring at 16:10 of the opening period when overage blueliner Adam Holwell snapped a wrist shot past Regina netminder Max Paddock to put Acadie-Bathurst up 1-0.

The Titan capitalized on some sloppy defensive zone play by Regina to get the much needed first goal of the game.

That turned out to be all the scoring until the third period but it wasn’t without a lack of effort or tremendous scoring opportunities by both teams.

The second period was all Titan as they peppered Paddock with 24 shots compared to just six by Regina against Evan Fitzpatrick in the Acadie-Bathurst net.

The game might may have turned ugly if not for the heroics and brilliant play of the Regina rookie puckstopper who gave his team of sliver of hope going into the final 20 minutes of regulation.

“I’ll describe it best and I basically mean it. We needed a second puck on the ice because for two periods they didn’t let us have it, so it’s tough to win.”

With their season on the line and visions of a CHL championship potentially slipping away, desperation set in for Regina along with a newfound energy in their game which resulted with the Pats turning the tables on the Titan in the final frame.

Refusing to go down without a fight in their home barn before a sold-out Brandt Centre, Regina pushed for the equalizer with 17 shots on the Titan net but Fitzpatrick stood tall between the pipes.

Around the 13-minute mark of the period, Pats F Cameron Hebig had a tremendous chance to tie things but was denied by Fitzpatrick.

On the ensuing rush, Acadie Bathurst went ahead 2-0 when Samuel Asselin tapped in a goal mouth pass from Truchon-Viel to give the Titan some breathing room.

With less than five minutes in regulation, Regina was awarded their only power play opportunity of the championship game but failed to capitalize.

Faced with the difficult task of scoring twice with the seconds rapidly winding down, Regina pulled their goalie in desperation hoping that the hockey gods of Canada’s oldest junior hockey franchise would provide a miracle.

In the end, Titan’s Ethan Crossman deposited the puck into a yawning Regina net to secure a 3-0 victory and solidify Acadie-Bathurst’s place in history as the winner of the 100th Mastercard Memorial Cup.

“Our goal coming to Regina was to win the tournament but you never think it’s going to come true,” said a jubilant Adam Holwell, who will go down in history as scoring the winning goal in the 2018 Mastercard Memorial Cup.

“We had four days to think about the final game after getting a bye. Now that it’s finally here and we did it, we can finally relax.”

Both teams failed to score with the man advantage under the big spotlight of the championship final.

Max Paddock made 41 saves for Regina.

Evan Fitzpatrick stopped all 28 Pats shots as he earned the first shut-out in a championship final since 2005 when Adam Dennis achieved the same feat while tending goal for the London Knights.

NEWS & NOTES: The 2005 London Knights were appointed the CHL Team of the Century following a fan vote in celebration of the 100th edition of the Mastercard Memorial Cup.

A final four ballot of representatives from each league plus a wildcard was formed and included the Knights, the 1995 Kamloops Blazers, the 2000 Rimouski Oceanic, and the 2013 Halifax Mooseheads.

The 2019 Mastercard Memorial Cup will be played in Halifax, Nova Scotia.

The 101st tournament will take place May 17-26, 2019, at Halifax’s Scotiabank Centre featuring the host Mooseheads along with the champions of the QMJHL, OHL and the WHL competing in the traditional round-robin format.