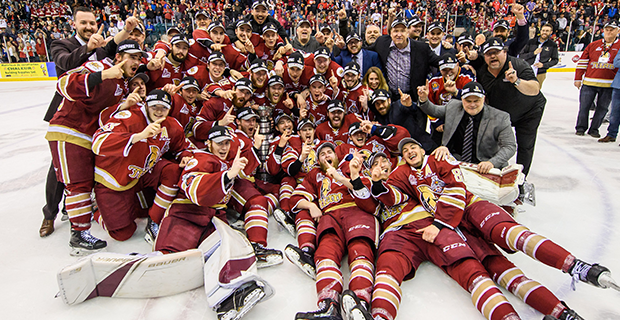 The last time the Acadie-Bathurst Titan qualified for the Memorial Cup, Jean Chretien was the Prime Minister of Canada and composite hockey sticks were on the verge of revolutionizing hockey forever.

In 1999, the Memorial Cup had not adopted their current corporate MasterCard title when the event was held in Ottawa, Ontario that spring.

The Titan did not fare well that May, finishing the tournament with a 0-3 record, scoring just 3 goals which resulted in an early exit from the CHL’s National Championship.

Fast forward to May 2018 and the current Titan, many of which in 1999, were just a few months or a few years old or not born yet, are looking for a much better result this time around.

The 100th edition of Canada’s Major Junior championship will be celebrated in Regina, Saskatchewan from May 17-27.

The host Regina Pats, WHL champion Swift Current Broncos and OHL winner, Hamilton Bulldogs will battle it out with Acadie-Bathurst for CHL supremacy.

On Sunday, May 13, the Titan defeated the Blainville-Boisbriand Armada 2-1, before a sold-out crowd at the K.C. Irving Regional Centre in Bathurst, New Brunswick to take the best-of-seven league final series in six games and capture the President's Cup.

Now it’s on to the franchises second MasterCard Memorial Cup appearance as the Acadie-Bathurst Titan since relocating from Laval, Quebec in 1998.

“I’m very happy for the players, fans and our GM Sylvain Couturier who gave me the opportunity to coach this team and realize our dream of winning the President’s Cup,” said Titan head coach, Mario Pouliot.

“I’d like to thank players like Jordan Truchon-Viel, Jordan Mayer, Elijah Francis and Sam L’Italien who arrived in Bathurst with me in 2014.

We passed through the process, worked together and were rewarded together with a league championship.”

The Titan had a strong regular season with a 43-15-8-2 record to win the Maritimes Division and finish second overall to Blainville-Boisbriand.

In the postseason, the Titan lost only four times with series wins over Chicoutimi (4-2), Sherbrooke (4-0), Victoriaville (4-0) and Blainville-Boisbriand (4-2).

The Titan slowly made their way up the ladder to success which so happens to coincide with Pouliot’s arrival in 2014 to the Northern New Brunswick city which sits on the Gulf of Chaleurs.

But with every new start, young, talented prospects brighten the future and have GMs and head coaches waiting for the day when a championship may come their way.

The Titan started to accumulate those much needed skilled prospects and after some development and experience in the league, Pouliot and company started seeing a return on their investments.

Names like Antoine Morand, Jordan Maher, Cole Rafuse and blue chip prospect, D Noah Dobson who, according to International Scouting Service (ISS) is slated to be a Top 10 NHL draft pick this June in Dallas.

Couturier, the organization’s long-time GM, could see that his team was starting to have potential but still needed a few key ingredients to plug some holes.

Along the way, Truchon-Viel was brought over from Sherbrooke and has turned into the undisputed team leader and captain of the Titan.

The solid two-way forward cracked the top 5 in playoff scoring with 23 points after being sandwiched between four Armada players.

Forward Sam L’Italien proved to be a tremendous acquisition from Cape Breton and evolved into a tremendous playoff performer during his third year in Bathurst.

The Titan began to see some light at the end of the tunnel in 2015-16 winning 27 games and qualified for a spot in the playoffs with 60 points.

Over the last two years, Acadie-Bathurst became a force in the league with season point totals of 84 in 2016-17 and a jump to 96 this past QMJHL campaign.

Last year, they swept the Quebec Remparts (4-0) before running into their nemesis, the Armada in the second round who knocked the Titan out in a close hard fought series that needed the seven game distance to be determined.

This spring, Acadie-Bathurst chased the Blainville-Boisbriand demons away with an emotion-packed series clincher in front of their faithful fans to cap off a fantastic playoff run and President’s Cup victory that will be remembered for years.

The Titan didn’t start the year as a contender or favourite to be around this late in the year but some clever trades by Couturier paid huge dividends.

In November, Couturier acquired German Rubstov from the Chicoutimi Saguenéens to add some offence to the line-up.

The Russian born forward and Philadelphia Flyers pick ended up with 32 points in 38 games during the season and added another 10 in 19 playoff contests.

Just before Christmas, F Mitchell Balmas was moved to the Titan from the Gatineau Olympiques, adding another valuable piece to the Acadie-Bathurst landscape.

Around the same time, D Olivier Galipeau found a new home in Bathurst after spending parts of four plus seasons in Val-d’Or and Chicoutimi.

It cost the Titan five draft picks but the move has paid off handsomely as the overager led all Q defencemen in playoff scoring with 20 points in as many games.

But their best pick-up was made a few days prior to the January 6 trade deadline when G Evan Fitzpatrick found a new crease to tend after spending three plus seasons with the Sherbrooke Phoenix.

Fitzpatrick played a pivotal role in his new squad’s success as he led the Q in playoff goaltending with16 wins, 2.10 save percentage and 2 shutouts.

Acadie-Bathurst will begin their quest for the 2018 MasterCard Memorial Cup on Saturday, May 19 when they face off against the WHL Swift Current Broncos.

On Sunday, May 20 the host Regina Pats, WHL, will provide the opposition.

On Tuesday, May 22 the Titan will close out the round robin portion of the tournament with a contest against the Hamilton Bulldogs (OHL).