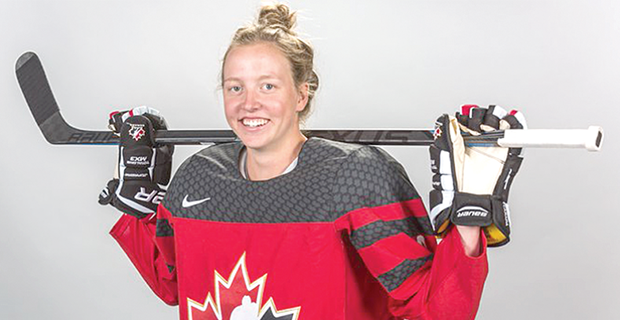 2017 U18 Worlds Team Canada Captain Ashton Bell is the youngest player attending this year's summer showcase and is expected to impress after a stellar MFHL season. (Hockey Canada Images)

Most of Canada is still relishing the warm summer months, but for 67 of the top female hockey players in the country, they’re headed to a cold rink in hopes of putting on the maple leaf later this year.

Both the National Development Team and National Under-18 Team will arrive in Calgary on Aug. 5 for a week of selection camps. These players have hopes of representing the red and white internationally this year.

Each player on the National Development Team played college last year, with three coming from Canadian schools. Players invited range from 18 to 21 years old, with the youngest being Ashton Bell, turning 18 this December. 15 players from last year’s development camp team are returning.

Marlene Boissonnault turned in a strong year in net for Cornell, going 10-1-2 with a .925 save percentage and 1.52 GAA, Ohio State’s Kassidy Sauve set a school record with 1,135 saves and .942 save percentage, and camp returnee Stephanie Neatby had a .sparkling 950 save percentage at Princeton with a 1.52 GAA.

Players from USPORTS (Canadian University ranks) and from Japan’s National program will also be at camp for scrimmages.

This is the only tournament Team Canada brass can select from before they name the team for the Four Nations Cup, taking place in Germany in January. Coaches and scouts will be following players all year at their colleges as well.

For the Under-18 Summer Showcase, 42 players were invited, with nine returning from last year.

In net, goalie Madelyn McArthur went undefeated in the PWHL with a 15-0-3 record that included seven shutouts and a 1.20 GAA. Over in Manitoba, Halle Oswald equaled McArthur’s 15 wins while putting up a 1.53 GAA and .936 save percentage.

The Under-18 team will play two games against the Russian U-18 squad, who are travelling to Calgary for preseason warmup. The 42 will be whittled down to 23, and those chosen skaters will head to Lake Placid from Aug. 17-20 for three games against the U.S.

Players return to their regular teams, then will likely represent their provinces at the 2017 Women’s National U-18 Championship in Quebec at the start of November. Final selections for the official U-18 National roster will be made after this in preparation for the IIHF U18 Women’s World Championship.

Across all the invitees, Ontario has 40 representatives, far ahead of the rest of the provinces. Quebec has nine, Saskatchewan and Alberta have six, B.C. has four, Manitoba has three, while Newfoundland and Nova Scotia each have one.