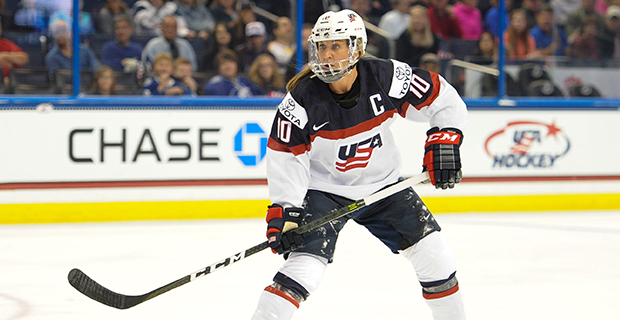 Pictured at the 2017 Four Nations Cup, Meghan Duggan will be making her third Olympic appearance after captaining the U.S. to a silver medal in 2014. (USA Hockey/Ally Eames)

For the U.S. women’s hockey team, it has been four years of sweat to get to the Olympics, but for this group it has become more than just about winning.

When the Americans hit the ice in PyeongChang, it will be two decades since they last claimed the ultimate prize — the gold medal.

“Honestly, I think it would be pretty historic for us to bring home gold. If you look at everyone who has been through this program in the past 20 years and everyone has come up short,” said U.S. forward and alternate captain Brianna Decker. “It is going to be a great opportunity for us to not only win it for them, but the younger girls too who are involved in USA Hockey and different youth programs throughout the U.S.”

The gold medal win at the Nagano 1998 Olympic Winter Games had a powerful impact on the growth of girls and women’s hockey in the States. For many on the current squad, the 3-1 win over Canada was palpable. It gave them something to dream about. And it is why they pushed for pay equality from USA Hockey before the 2017 IIHF Women’s World Championship.

For the veterans, now is the time to leave one more mark on women’s hockey history — breaking the 20-year-old drought.

“We set these goals as individuals at such a young age. It runs deep in your blood and in your soul. This is something we’re always hungry for,” said U.S. captain Meghan Duggan.

The team almost tasted victory at the last Winter Olympics, coming within inches of gold in Sochi. Up 2-1 with 3:26 seconds left in the game, Canada pulled their goalie. Then with just under a minute left, Canada tied the game and took their fourth gold medal in overtime. Kacey Bellamy said each loss they have languished over is all part of the hunger driving them for a different result.

“We have learned so much over the last four, seven years since Vancouver and Sochi and I look at it as sometimes you really do need to fail to success,” said Bellamy. “We have learned so much within this program. We have grown so much as a team. People have grown so much individually and I don’t take back any off those losses because of how much we have learned. I think that when you do win over and over again you don’t think you need to change things but we’ve had that opportunity to be able to grow so much in as a program and as an organization.”

However, the U.S. has all the success outside of those Olympic years with four straight IIHF Women’s World Championships gold medals to show for it.

It begs the age old question, how can the U.S. perform so well in every competition except when it comes to the gold medal at the Olympics?

“It’s no secret that the U.S. program have come up short in the last couple of Olympics in terms of our ultimate goal and what we want to achieve,” said Duggan. “We as a program and as a team, since the last Olympics have really taken some positive strides forward. I’m certainly encouraged with the progress we have made in where we are at. You can have a team full of girls or a program that thinks back to the past a lot and dwells on that but we haven’t done that. We’ve looked at ourselves in the mirror and realized what do we need to get better and we have done those things.”