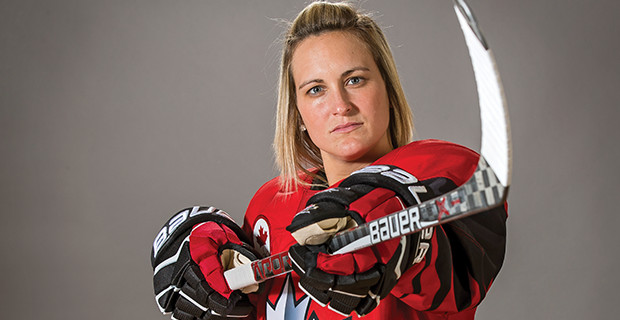 When Canada announced their 23-person women’s hockey roster for the 2018 PyeongChang Olympic Winter Games, they forgot to mention one key player — confidence.

Canada is seemingly brimming with it after getting the upper hand in an exhibition series sprawled out over three months against the U.S., the number one ranked team in the world.

A series in which Canada won five of the six outings.

After a tough couple of years since Canada won their fourth Olympic gold medal in a row, the swagger is not smug or presumptuous. Rather, it’s a realization that, despite dropping four world championships in a row and being three-time losers at the 4 Nations Cup, the national team just south of the border isn’t unbreakable.

“At the end of the day, we are going into the Olympics and it’s not about what we have done in the past, but using that as momentum to continue on and take each day at a time and each team at a time. We can’t take any team for granted. We need to concentrate on the opponent we are facing and if it ends up we are playing the U.S. in the finals, that just means we need to go out and play our game and believe in ourselves and our abilities and know that they can be beat,” said Agosta.

Defenceman Meaghan Mikkelson (St. Albert. Alta/Calgary, CWHL) said the team had to move away from concentrating on what the U.S. team was doing and put the focus back on themselves. A process that proved successful as they moved through the exhibition series.

“I believe we are the better team when it comes to performing the little details and that is what we need to focus on. We had to get the thought process away from just winning. It allows you to really play to your potential when you get hyper-focused on areas, the rest of the game will take care of itself,” said Mikkelson. “We really focused on playing our best game and fine-tuning the details, and off winning and what [USA was] doing. It became about what we needed to do to win and be our best.”

Forwards
Canada will take 14 forwards with them to the Olympics, eight of them returning from the 2014 Games.

For veteran forward Brianne Jenner (Oakville, Ont./Calgary, CWHL), one word immediately pops in her head when it comes to the mix of new and returning players.

“We have nine rookies and I think the first thing that comes to mind with this group is speed. We have some really athletic players that are joining this roster and I think they are going to bring a lot of speed to our game.”

And Coach Laura Schuler points to rookie Bailey Bram (Ste. Anne, Man./Calgary, CWHL) as one of those players.

“She is a great character person and she brings a lot of energy to our bench. She is one person that can continuously put smiles on everybody’s faces and I truly believe that is what you need to be successful and to win hockey games.”

“It’s an honour to be selected to lead this group at the Olympic Winter Games and to wear the ‘C’ after so many inspirational leaders that have come before me,” said Poulin (Beauceville, Que/Montreal, CWHL). “This is a special group of 23 players and we’re excited to hit the ice together for the first time in South Korea in a few days.”

Poulin, who scored the game-winning goal in both the gold medal finals at the 2010 and 2014 Olympics, has captained the national team since the 2015 IIHF Women’s World Championship. She has captained the team through several international tournaments since the last Olympics as the torch was passed to her from Caroline Ouellette, who retired from international play along with Gillian Apps, Jayne Hefford and Hayley Wickenheiser.

“Just having that group of veterans that have been around the past couple of years is quite awesome. I think we have built as a team and having the young faces coming up is quite exciting … for us as veterans now, we take that role very seriously. I have been so lucky throughout the past couple of years of having great role models. We all looked up to them and having those shoes to fill is quite the honour.

We take pride in that,” said Poulin.

The golden goal scorer at the past two Olympics, Poulin has notched eight goals and 12 points in her 10-game Olympic career. She along with teammates Rebecca Johnston (Sudbury, Ont./Calgary, CWHL) and Wickenheiser led the team in scoring at the 2014 Games with five points apiece. In the recent exhibition series against the U.S., Poulin and Agosta led the team with five points each.

Defence
Canada will have a slightly different look on defence as they head into PyeongChang.

“They have tremendous chemistry, having played college hockey together. I think they will really balance each other out,” said coach Schuler of the pair. “Brigette really brings an offensive flair to her game. She really likes to shoot the puck and she has tremendous vision. Whereas Larocque is such a sturdy defenceman for us, nobody gets by her. She is tough in the corners, she is hard to battle against and she is a tremendous, tremendous penalty killer for us. The two of them absolutely compliment each other and I think we are just so fortunate to have them be a part of our program.”

Expect Fortino and Larocque to continue to log big minutes for Canada at the Olympics. While Ward held down the most minutes at the last Games (121:14), Fortino was a close second with 113:39 minutes logged, followed by Larocque at 107:16.

Goaltenders
Shannon Szabados (Edmonton, Alta./Hockey Canada) has helped Canada win the past two Olympic gold medals and there is no reason to believe she won’t be called upon as the number one goalie in PyeongChang.

Riding right next to her again will be Geneviève Lacasse (Kingston, Ont./Calgary, CWHL), who is a returnee to the national team for the Olympics (however she did not see any action in Sochi).

Canada had to make extremely tough decisions when it came to choosing the three goalies they would take with them. With college standout and 2017 Patty Kazmaier winner Ann-Renée Desbiens (La Malbaie, Que./University of Wisconsin, WCHA) on the rise, she beat out a prominent contender for Canadian Olympic roster in Emerance Maschmeyer.

Agosta on Hunt for Fourth Medal
USA Ready for Comeback