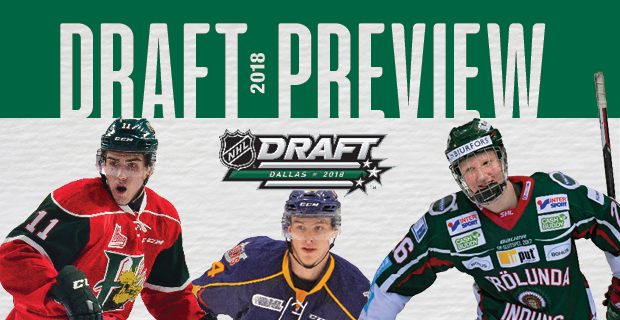 The time where players, and their parents – who’ve dedicated years of their lives to early weekday practices, weekend tournaments and countless coffee runs – get to unwrap a new hockey sweater.

While the headliner at this year’s big show, Rasmus Dahlin, has already been determined, there is plenty of draft-day intrigue on tap.

After Dahlin pulls on his Buffalo Sabres jersey as the No. 1 overall selection Friday, do the Carolina Hurricanes take Barrie Colts forward Andrei Svechnikov second overall as widely predicted, or do they go off the board and grab Halifax Mooseheads forward Filip Zadina instead?

Or does Zadina fall as far as No. 5 to the Arizona Coyotes?

It gets significantly more interesting for Lloydminster Minor Hockey product Ty Smith of the Spokane Chiefs. The 2015 HN Alberta Player of the Year (POY) was ranked 19th by the International Scouting Service (ISS) in its final draft rankings, but could go as high as 10th to the Edmonton Oilers or 12th to the New York Islanders.

“He’s going to be a great first-pass defenceman,” Chiefs head coach Dan Lambert says of the slick playmaking blueliner who finished his second full season with the Western Hockey League club scoring 14 goals and adding 59 assists. “He’s going to be a guy who can play against everybody else’s top players just because of his ability to skate and defend.”

B.C. 2015 POY Luka Burzan of the Brandon Wheat Kings will also pull on a big-league sweater at the draft. Whether it’s before or after his ISS No. 58 ranking remains to be seen.

“I’m trying to stay pretty calm,” the centre says just days ahead of the draft. “It’s obviously pretty exciting. I’m not trying to get too nervous. Obviously, getting picked is a dream come true.”

And that’s the best thing about Christmas in June – unwrapping the gift that marks the beginning of your big-league journey.

OHL: Living up to the Hype