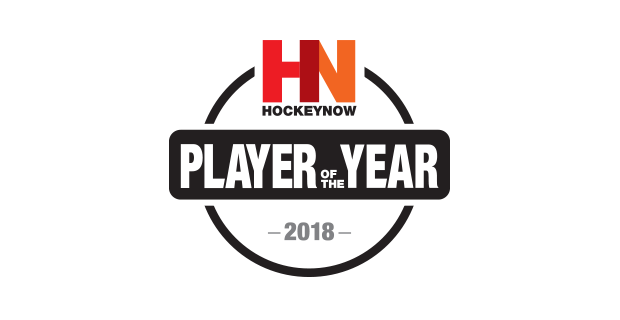 The Minor Hockey Player of the Year race is especially top of mind at HockeyNow as we look ahead to watching former player of the year Dante Fabbro wear the red and white at the World Junior Championships later this month – assuming he makes a full recovery, of course.

Getting the chance to see the Player of the Year winners compete and get drafted is one of the many great perks for us and we can’t wait to hand out the awards once again at the end of the season.

The award is given out annually to one player in each B.C., Alberta and Ontario who is at the top of their game and best exemplifies leadership in their school and community.

Our selection committee, chaired by International Scouting Services founder and head scout Dennis MacInnis, scouts top players in each province and provides us with monthly preliminary lists. Here are the lists for December. Some of these players could be HockeyNow’s 2018 Players of the Year – and could be sporting the red and white themselves someday soon.

Here are the POY December preliminary lists for B.C., Alberta and Ontario.

Latimer, Carson (RW) Delta BPrep Green
Always seems to be around the puck and reads the play well - has a good skill set that allows him to create offense.

Sward, Graham (D) Yale Bntm Prep
Big, strong and can get up the ice, good shut down D man in the WHL, tough to play against & controls his space.

Verbicky, Kobe (LW) Yale Bntm Prep
Power skilled forward that does it all and plays a mean game, plays on the edge and has lots of skill.

Wong, Trevor (F) St. Georges 1
Quick, fast, good hands in tight, plays with energy, has speed to burn, one of the best skaters in the draft.

Ceulemans, Corson (D) OHA Edm Bntm Prep
Big, mobile defender that likes to have the puck on his stick. Skates well, head up, controls the play, can be aggressive when needs to be, has a good shot from the point, will join the rush and makes good passes.

Guenther, Dylan (C) N. Alb XTrm Bntm Prep
PF with high end skill, does it all with speed & skill, can score in any situation & dangerous all over the ice.

Lajoie, Marc (D) N. Alb XTrm Bntm Prep
Big defender that plays a 2-way game but really excelled in a shut down role not flashy offensively but will chip in.

Ostapchuk, Zack (F) N. Alb XTrm Bntm Prep
Another big forward on a strong team that can really skate, uses size down low and hard to knock off the puck.

Stringer, Zack (C) Lethbridge
Good offensive player. Has all the raw abilities to take game to next level. Big kid with soft hands & a good shot.

Tschigerl, Sean (F) OHA Edm Bntm Prep
Fast, smart, captain does it all, no glaring  weakness, moves the puck and jumps to holes and can finish.

Peterson, Dylan (RW) CIH White
Fluid skater that generates a lot of power, has tools to be a dynamic offensive forward when he wants to be.

Portokalis, William (C) Don Mills
One of the most well rounded players in his age group. Talented in many aspects of the game.

Power, Owen (D) Miss. Reps
Dynamic skating and agility continues to show a level of calmness, patience, and confidence in his own zone with the puck.